From Festipedia, hosted by the FR Heritage Group
(Redirected from Badco)
Jump to navigation Jump to search 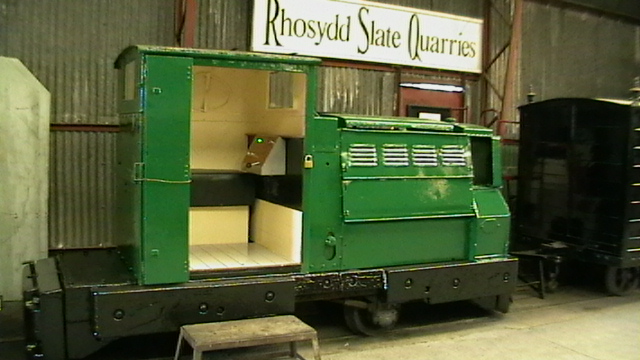 This Ruston & Hornsby 44/48hp 4wDM (Builder's number 203031 of 1942) was the largest type in the Ruston & Hornsby narrow gauge range during World War II, and many were built for use in defence establishments and for other wartime work. This locomotive was used at RAF Fauld in Staffordshire, where it was used for haulage in an unusual ordnance store, built underground in disused gypsum workings.

Following the closure of the base in 1981, the locomotive was purchased by the Llanberis Lake Railway where it was named BRAICH and was cannibalised for spare parts.

The locomotive was later obtained for the WHR, arriving in June 1998. It is currently (2005) on static display and is a favourite among visiting children of all ages. Christopher Dearden explained why on WHR E-group posting 21676

"Badco is a Ruston & Hornsby 44/48 diesel engine which has had its cab modified with buttons and a throttle that children (and adults!) can play on. There's a horn and a whistle you can sound, as well as a throttle that you can move to "accelerate" (the engine noise gets faster as you move it). Badco is extremely popular with visitors, though it is in need of a coat of paint at the moment. It's usually to be found outside the main shed in either Road 1 or Road 2 - the sidings are numbered from right to left as you look on the webcam."

March 2009 - Currently under refurbishment with prospect of a new colour. - turned out to be undercoat!!

There is (or was in 2009) no intention to restore it for use on the line. Parts from it have been used on other units.