From Festipedia, hosted by the FR Heritage Group
(Redirected from Hafoddty Quarry)
Jump to navigation Jump to search

Served by the Votty And Bowydd link line to the Ffestiniog railway. This lay on Lord Newborough's land and was originally worked in 1800 for a while, then again in 1823 before being sold in 1828 to John Roberts of Caernarfon who was also working Glynrhonwy.

He went bankrupt in 1833 and in 1834 it was taken over by Shelton and Greaves, who also took over Glynrhonwy and Bowydd Quarry. They gave up the site in 1846, when again both Hafodty and Bowydd quarries were taken over as separate concerns by the Percival family of Northampton. Although worked separately, Hafodty and Bowydd were linked together by tramway from about 1854 and also linked to the first Bowydd Incline down to Duffws Station - this incline eventually becoming Incline No.1 of the Rhiwbach Tramway.

Hafodty appears to have continued in work until about 1870, when the two concerns were merged into one company and the Hafodty workings were given up, being faulted out. By the late 1870s no tramway links remained and Hafodty was isolated. The land was retained however as the slate below it might be worked from Bowydd. From 1870 or so until the 1980s the old quarry sink was used as a reservoir - at first for the Votty And Bowydd Company and then by Greaves' of Llechwedd. The area of the waste tips and adits was gradually tipped over, firstly by the Votty & Bowydd Company itself and then again at a higher level by Maenofferen, whose tippings have now completely buried all traces of Hafodty apart from the sink.

The photograph here was taken from the Maenofferen Tip in 1981 and shows it full of water. 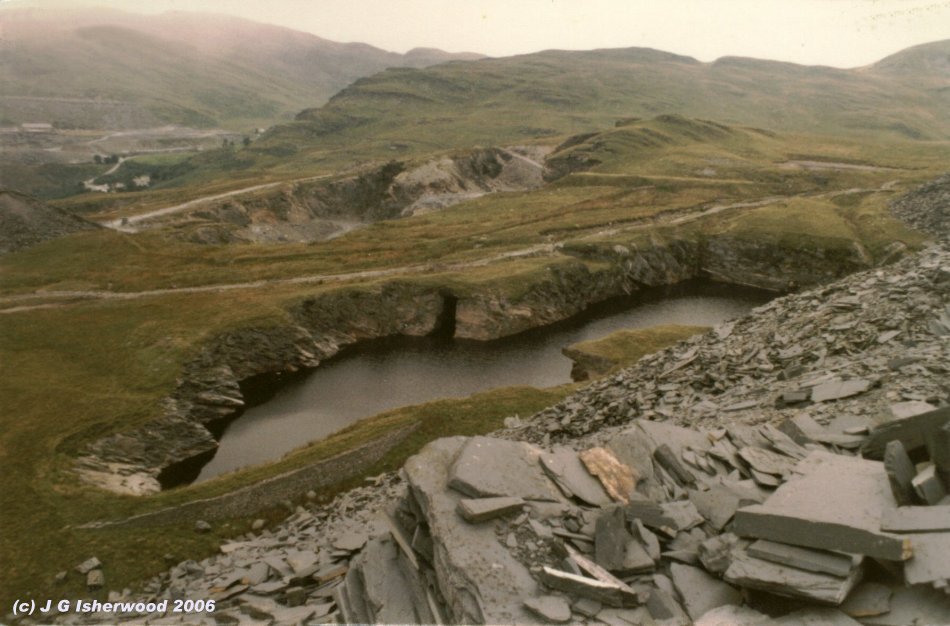