The picture shows it in 1980, before it spent the winter at private premises in Tremadog until a sliding bed truck could be found to get it across the hump of the Cambrian Coast crossing and into Gelert's Farm Works

The loco was bought by former WHRS and FR Co Director John Ewing in 1980 for use on the WHR when the stock of the Crockway Light Railway at Maiden Newton in Dorset was auctioned. Agreement was reached for the FR to restore the loco as a private project funded on an "as and when" basis, and the frames were moved to Minffordd yard having spent some time in Sussex, where an intended restoration did not get started. The boiler was sent to Bridgnorth on the SVR for repairs to the copper firebox. The condition of the boiler was the reason for the dismantling of the loco.

At one point it was christened "Nantmor" but the name will not be perpetuated.

According to updates of Vic Bradley's Industrial Locomotives of North Wales[1], it departed in August 1991 to J Quentin, Herefordshire.

The loco has the distinction of appearing on a "Great Little Trains of Wales" tea towel design which remains on sale. The picture on which this was based was one taken at Pen y Mount for a Welsh-language book on narrow gauge railways. 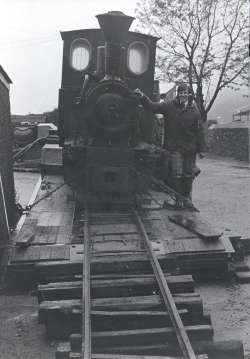 Fojo being unloaded from low loader in Tremadog in 1980