From Festipedia, hosted by the FR Heritage Group
(Redirected from Henry Ellis Parry-Jones)
Jump to navigation Jump to search 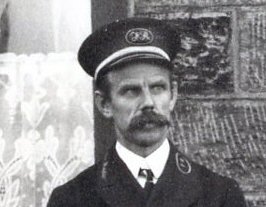 Taken at Harbour Station in c1920

He was Station Master at Dduallt c1904, then Penrhyn(from 1905) and finally Portmadoc (certainly from November 1909). He was responsible for both the old and new stations at Porthmadog when the WHR started in 1923. From 1929 he had to supervise Porthmadog, Minffordd and Penrhyn stations. He was still employed (not known in what capacity) when the railway finally closed in August 1946.

His father, John Parry Jones, was an engine driver for the FR. Henry was given the middle name of Ellis after his mother's family.