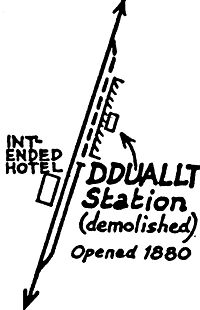 When steam traction was introduced in 1863, a slate water tank (which still exists) was built near Dduallt farm about 42 chains below the present station, on Tank Curve, and all up trains stopped for water. Regular use of this tank probably ceased about 1872 when Tan y Bwlch was opened.

The quiet station at Dduallt was first opened as a passenger station in 1880 following a request from the landowner Col. Tottenham. Despite the plan shown here, there was not a full passing loop here, only a short siding facing downhill[1]. The small building was wooden. In 1884 it became a block post when the instruments from Tunnel South were moved here, but with no loop could not be a passing place or Staff station. Up goods trains are said to have had to stop at Dduallt for examination before passing through Moelwyn Tunnel though the venting of casks of ale in transit mentioned in Boyd may have been unofficial.

The original appearance of the station building is illustrated in iBase 2852(taken sometime in 1887 or 1888 based on the loco's condition), while iBase 2855 amongst others shows the building in modified form with extra windows, smaller entrance on the front and a sloping canopy over the latter. Details of the extensions to the rear are quite vague.

For a period in the late 19th century William Thomas Edwards was stationmaster here during his time working for the company. He was a poet, whose bardic name was Gwilym Deudraeth; sometimes he would indent for repairs in verse, at others he would engage in poetic competition with the Loco Superintendent William Williams (Gwilym Meirion). Dduallt is one of those places in Welsh legend where, if you spend the night, you wake either a madman or a poet.

From this modest peak its importance seems to have declined steadily, becoming an unstaffed halt by the 1930s (when it was landscaped by Clough Williams Ellis) until final closure to passengers on 15th September 1939.

Dduallt started to come alive again when digging of the Deviation began on 2nd January 1965. Although it was some time before the reopening the Deviationists were often there with their plant and equipment - mainly old doublehead rails and skips. The hollow in the hills began to ring to the sound of voices and steel on rock.

The line was inspected by Col. J.R.H. Robertson, Chief Inspecting Officer of Railways on Sunday 31st March 1968 and Dduallt reopened to passengers on 6th April 1968. Reopening to Dduallt was only just achieved on the planned date because work had been delayed by the 1967 Foot and Mouth outbreak that resulted in a ban on volunteers travelling to the railway that lasted for several months. The rodding on the top points of Tan y Bwlch was completed minutes before the first train arrived, as was the setting up and packing of the track on which the train would stand at Dduallt. 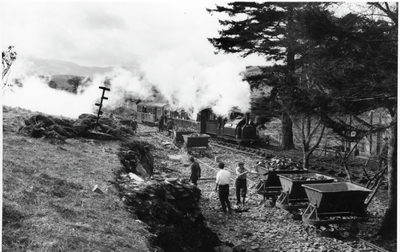 Prince arriving at Dduallt on 31/03/1968 with the ministry inspection special. Volunteers can be seen busy digging to provide the space where the loop was laid, carefully preserving the trees. Source: M Single via iBase No. 2873.

The body of the Old No 1 Van was set up on blocks by the bottom points at the south end and used as the signal box at the time of reopening. Initially the loop was not ready and early trains ran with a pilot engine (usually Prince) waiting at Dduallt until the train arrived. The pilot engine was locked in the southern end of the incomplete loop which formed a short siding. Then the pilot engine coupled onto the train and took it to Tan y Bwlch leaving the train engine standing at Dduallt. The pilot engine waited in the bottom siding at Tan y Bwlch and with the section clear the train engine ran down from Dduallt to take charge of its train again. A variation was for the pilot engine to return the train to Porthmadog. In this case, the engine that had brought the train up then went into the siding at Dduallt to await the following train, and so on until the end of the day. These modes of operating continued until the full loop was available from 20th May 1968.

In mid summer 1968 the Bunny Hutch was moved from Tan y Bwlch to Dduallt. It served as the housing for the staff instruments once they were moved from old No 1 Van. The Bunny Hutch was moved on to other places including Blaenau Ffestiniog once the line was extended beyond Dduallt in 1977. Carriage 103 (1968), the new buffet car introduced in that season had a special large window/counter opening on the south side so that passengers waiting at Dduallt platform could be served with refreshments etc.

Because of increasing traffic, from 1968 to the early 70's, an additional service was run from Tan y Bwlch to Dduallt for a period, colloquially known under various names including the Dduallt Diddy and the Dduallt Shuttle. It ran between the other trains in the Peak period and was usually formed with Moelwyn, Van 6 (then No 2 van), Quarrymans No. 8 and Bug Boxes, with Toastrack No. 37 substituting from 1972.

The original slate water tank at Tank Curve was re-commissioned in May 1969 as an emergency supply, but was later replaced by another tank at the north end of Dduallt platform, fed from the water supply at the old tunnel (which was distinctly acid). This tank was removed when trains ceased to terminate at the station. Later a tank was added at the south end of the station with the same water supply, but this is now disconnected.

The Orientation Table on the hillock at the centre of the spiral was built in the Spring of 1970. The footpaths up the hill to the orientation table and generally around the station were very heavily trafficked for the decade that Dduallt was a terminus.

As Deviation work progressed, a pull & push service, officially called the Gelliwiog Shuttle (hauled by Moel Hebog and carriage 110) was operated from Dduallt to Gelliwiog from 26th May 1975 to enable tourists to experience part of the Deviation route before the new Moelwyn Tunnel was opened. It operated from a special bay platform at the north end of the station.

Dduallt was the upper terminus of the main service until 1977. In this year the Bunny Hutch was taken away and the staff instruments moved to a temporary signal box at the north end, built by the North Staffs Group. This signal box with a 13-lever frame opened in 1977 and closed in July 1988 when the signal arms for the loop were removed. [2]

Dduallt remained as a block post and passing place until the end of the 1988 season, but more recently has been reduced to the status of a Halt. The signal box has gone and the loop is disconnected at the Blaenau end but has been relaid as a siding with run-round loop around the inside of the curve of Site 1 embankment, which has been filled in to form a level area across to the quarry used for Deviation Site 1. It is still an intermediate block post with staff instrument so that works trains and other specials can be locked in the siding.

An attractive stone-built passenger shelter has been added by the North Thames Area Group of the FRS, between 1990[3] and 1994[4].

Rhoslyn Cottage, opposite the platform and derelict for many years, and once planned to be converted to a hotel, is now in company ownership.

For general details see here
This remote halt is accessible only by mountain footpaths and stiles. There is no road access.

Trains will not normally stop here, as this location is classed as a halt, and not a scheduled stop. Passengers on the train should notify the guard as soon as possible if they wish to alight at this location.
Passengers at the halt should hold out their hand to attract the attention of the driver, who will often give a short whistle to acknowledge that the train will stop.