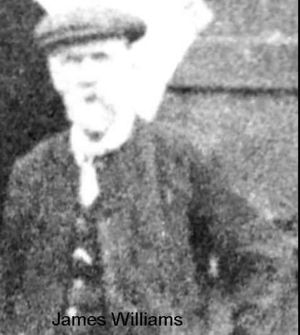 In 1881 he appears to still be living in Bangor and working as a joiner in the building trade. In 1901 he was living at 19, Dora Street, Portmadoc, working as a Railway Joiner, so it is assumed that is for the FR. In 1911 his address was South Snowdon Wharf, apparently the only house there, describing himself as a Railway Joiner. He had married Jane in 1884 and as she came from Harlech, he may have left Bangor soon after 1881. They had three children, all born in Portmadoc, the first in 1896 so he may have worked for the FR before that.

James Williams is confirmed as the person in the photo known as Boyd26H. (click here to see) This photo is labelled "A Group taken in the Works Yard before the First War". It is believed to be around 1913. It is not all staff from the yard at that time. There was a list attached to the original which declares who the people are. This person is believed to be in the first row from the back and the fourth person from the left handside.