Actually John Jeffery Roberts, Born 1861 in Portmadoc. Married to Annie in 1878. In 1881 he described himself as a 'Turner at Iron Foundry". At that time was living at 2, Smith Street, Portmadoc, with two daughters. In 1891 he was a fitter at 30 Chapel Street and by 1901 still a fitter but moved again to 51, New Street where he still was in 1911. He was definitely still working for the FR in 1923. We can't be sure if he worked for the FR all this time.

John Jeffrey Roberts is possibly the person in the photo known as Boyd26H. (click here to see) This photo is labelled "A Group taken in the Works Yard before the First War". It is believed to be around 1913. It is not all staff from the yard at that time. There was a list attached to the original which declares who the people are. This person is believed to be in the third row from the back and the eigth person from the left handside. 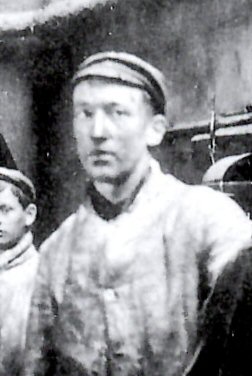