From Festipedia, hosted by the FR Heritage Group
(Redirected from Llechwedd)
Jump to navigation Jump to search 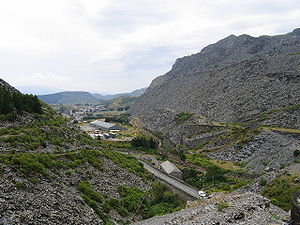 A view of the Llechwedd (on left) and Oakeley (on right) quarries, from the north
Date: 8 August 2005
Photo: Tamara Kwan

Llechwedd Quarry was one of the major slate quarries connected to the Festiniog Railway at Blaenau Ffestiniog.

Llechwedd Quarry was opened in 1846 by John Whitehead Greaves, who was also the lease-holder of the Bowydd Quarry. A direct incline connection was made to the Dinas branch of the Festiniog Railway in 1852.

By 1882 it was producing nearly 25,000 tone of finished slates annually. From the 1850s onwards most the the quarry machinery was steam driven. As early as 1890 electric power was being generated at the quarry and a full-scale hydro-electric power station was introduced in 1904. [1]

The quarry was a commercial success through the 1930s. After the Second World War production declined here along with the other quarries in the area. In 1975 the "Llechwedd Slate Caverns" tourist attraction was opened on the site, with some of the workings accessible via underground tramway. Since then the company has continued both tourist and commercial slate production.

Management of Llechwedd remained in the Greaves family until 1953, when it passed to the Williams-Ellis family. Martyn Williams-Ellis being a direct grandson of J.W. Greaves

Llechwedd currently owns and operates quarrying operations in the nearby Maenofferen and Votty and Bowydd quarries.