Votty and Bowydd Quarry was one of the major slate quarries connected to the Festiniog Railway. Was also spelt the Welsh way as Fotty. The spelling "Votty" was an anglicization of Foty or Fotty, itself a corruption of "Hafoty / Hafodty / Hafoddty". 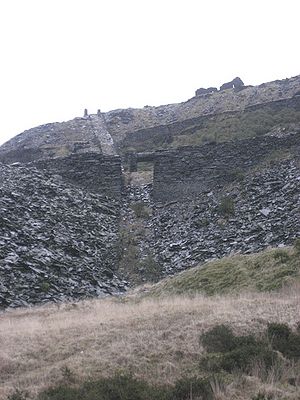 Votty Quarry operated from the 1830s. It never had any direct rail access, the slate being brought out via Bowydd.

In 1854 direct connection was made by incline from Bowydd to the F.R., though in 1863 this was displaced by the number 1 "Bowydd" incline of the newly-constructed Rhiwbach Tramway. However, by 1880 most slate was going out by a connection made part-way down the Diffwys incline.

Bowydd Quarry, sometime called Lords Quarry, was a late eighteenth century working, substantially developed from the 1820s onwards. In 1870 the neighbouring Votty and Bowydd quarries merged for form the jointly-owned Votty And Bowydd Quarry. By 1882 it was producing nearly 12,100 tons of slate and employing nearly 350 men. Its peak output at the end of the nineteenth century was over 17,000 tons annually and employing 500 men. [1]

These quarries were located on the slopes to the North of the present town centre, and to the east of the later-established Llechwedd Quarry.

The Festiniog Railway served the quarry from its earliest days (the original "branch" serving Holland's quarry at Rhiwbryfdir).