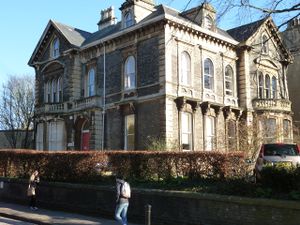 Where it all began - St Mary's Church House (36 Tyndalls Park Road) in February 2016. The windows of the basement rooms where the meeting took place are just visible through the hedge to the left of the silver car. Photo. Gordon Young.

St Mary's House, where the Bristol Meeting took place, was purchased by St Mary's Tyndall Park, Bristol, after the First World War to provide more space for the church. It is a large Victorian residence with a basement. The Bristol Railway Circle rented two basement rooms on the Woodland Road side of the building on a continuous basis. One contained their 'O' gauge layout and the other was their meeting room.

The building had problems with wet rot requiring much rebuilding and it was eventually sold to the University in 1974. It was at one time the Department of Social Studies but is currently (2016) the Department of Theology and Religious Studies.

St Mary's parish church was declared redundant in 1970 and sold to the BBC who used it as a store. It was eventually sold to become an independent evangelical church and it is now the main church of the Woodland Group of Churches. It has a thriving congregation with many student members. 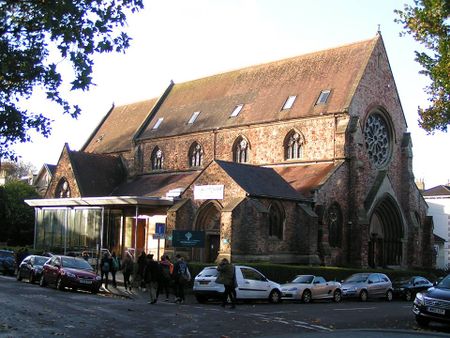