Galloping Goose is the popular name given to a series of seven railcars (officially designated as "motors" by the railroad), built in the 1930s by the Rio Grande Southern Railroad (RGS) and operated until the end of service on the line in the early 1950s. They were derived from full-sized automobiles.

A replica, built on a Morris commercial chassis, of one of the 'Galloping Goose' rail cars of the Rio Grande Southern Railroad of the 1930's which is currently based on the Statfold Barn Railway. The Goose visited the F&WHR for the Quirks & Curiosities II. 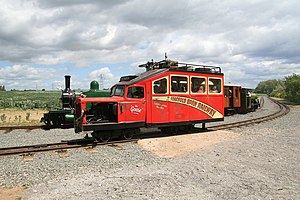 The Goose in service on the Statfold Barn
Retrieved from "https://www.festipedia.org.uk/w/index.php?title=The_Goose&oldid=74751"