U98 was a 1st World War German U-boat which after the surrender was purchased by a Portmadoc company and broken up on the foreshore by road 6 of Harbour Station in 1922. It was ordered on 23 September 1916, built by Vulcan, Hamburg and launched on 5th July 1918 and commissioned on 8th August 1918. It made one patrol and sunk no ships. The commander was Richard Scheurlen.

When hostilities finished on 11th November 1918, it was arranged for the majority of the German U-boat fleet to surrender at Harwich which was then the major British submarine base. By the 18th April 1919 a total of 150 surrendered U-boats were moored on the River Stour on the Suffolk/Essex border. A few were exhibited to the public at British ports. For the one displayed in London there was an entrance fee of one shilling. Some were assigned to the French, US, Italian and Japanese navies. The remainder were sold for scrap at ports around the UK.

There is a picture of U98 tied up against a Portmadoc slate wharf in Heritage Group Journal. 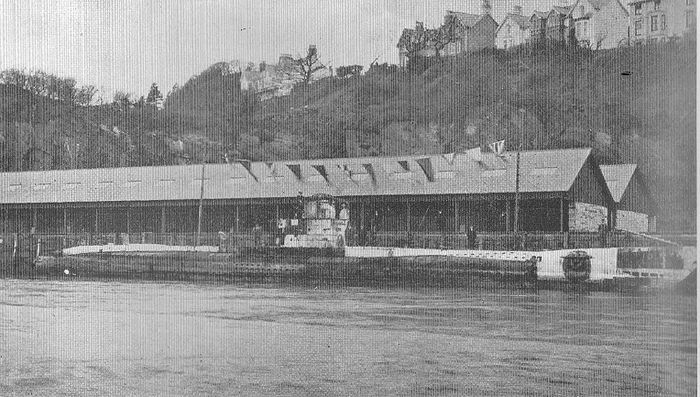 There is a row of flags flying above the submarine in the photograph. This may just have been a victory celebration. An internet search does not provide any evidence that U98 was displayed to the public in Portmadoc although it must be a possibility, whether in admiralty or private ownership.

There is a story that the steel plates from her hull were used to provide a steel lining in Garnedd Tunnel in the 1920s. See the Garnedd Tunnel article for more details. Other parts may have been re-used in the Portmadoc locality. According to the BBC, the War Memorial at Llanfrothen which was formerly a folly designed by Clough Williams Ellis has strings of nuts attached to the top of it which he is said to have scrounged from the submarine as it was being cut up. David High relates some other tales of the fate of a few parts.

The movement of 500 t of steel, iron & sundry scrap materials from the beach by Harbour Station must have been a task. There was no wave wall in those days and perhaps a horse and cart could get to the site. Britannia Foundry was so close it is tempting to speculate that some found its way there and to the other foundries in Portmadoc. Perhaps a more likely explanation of how the bulk of it was transported is by ship to a port with a steel industry.