This is the second Van 2 of the preservation era, details of the first Van 2 can be found here.

Van 2 is a Brown Marshall bogie brake and luggage van of 1873. It was rebodied with passenger compartments in 1920-1. Although officially numbered as Van 2 it is also known as Carriage 10.

The Festiniog Railway bought the bodies for three bogie luggage vans from Brown, Marshall & Co. - two in 1873 and the third in 1876, and added the bogies and brakegear at Boston Lodge works following delivery. They each contained a guard's compartment, a large luggage compartment accessed externally by sliding doors or internally from the guard's compartment, and a small compartment for dogs.

Van 2 is one of the oldest bogie vehicles on the Festiniog Railway and it is the only remaining bogie carriage in service to have a solely wooden underframe. In 1920/1 the vehicle was completely re-built with a new body incorporating two passenger compartments (the framework for the duckets may be original). Of the metal parts only the handbrake and some metal brackets have come from the original.

Van 1 is a replica of this type of van in their original condition.

Following the reopening of the railway in 1955 it was used on works trains and was re-numbered as Carriage 10. According to Ian Smart, he was responsible for the damage to the guard's duckett caused by fouling the loco shed (for the quarry i/c loco) when returning under the road over bridge at Duffws [1].

The van was restored for passenger use in 1991. The bogies came from Carriage 17 which in turn got roller bearing bogies from 117 which got new bogies when it became part of the green Push-Pull set. It now carries its late 1930s livery, probably based on Colonel Stephens livery, but not placed on the carriage in his lifetime (Analysis of paint layers on the original body show three colours, a deep maroon, presumably from the 1920 rebuild, yellow, which would seem from photos to be from the mid-1930s 'jazz trains' period, and then green, which could only have been carried in the last two or three years before the end of passenger services in September 1939. During a re-numbering exercise in 2005 the carriage regained its original identity as Van 2. It was repainted and externally renumbered back to 10 in August 2013. The renumbering was done by mistake, as the Board had agreed that Vans 4 and 5 could be renumbered back to their post 1956 numbers of 11 and 12, but not Van 2. The van will be correctly numbered as No 2 at its next repaint.

Van 2 visited the Welsh Highland Railway (Caernarfon) in September 2005 for the Superpower event, reaching Rhyd Ddu only once on Friday 16 September 2005. Van 2 was accompanied by Prince and Carriage 1. 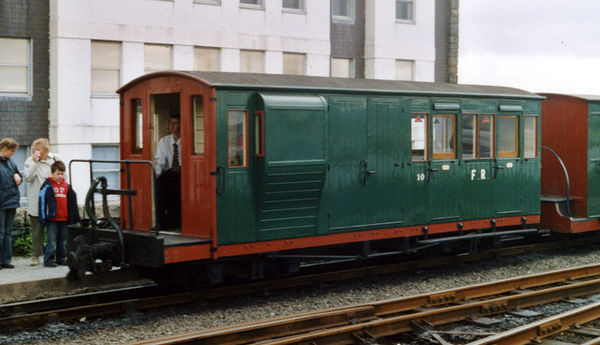 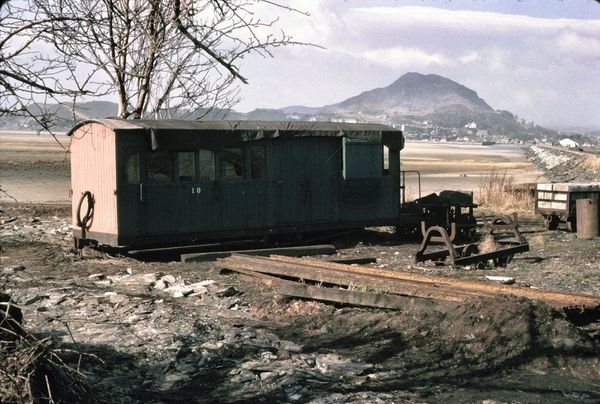