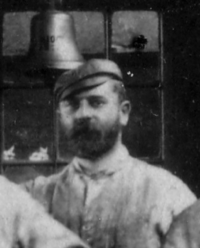 William Godfrey Williams was a son of William Williams (1835), born 1867 in Ffestiniog.

Evidence from the time of his dismissal in 1908 suggests he had been employed for 25 years so it is likely he started working for the FR in 1883. By 1891 he was living with the family at Boston Lodge and working as Foreman of Iron Foundry (presumably Boston Lodge). In 1901 he was still there but classed as a fitter. He was sacked in 1908 along with other employees in a cost cutting drive. At that time he was the Locomotive Foreman.

He is noted as holding an important position on the Metropolitan Railway, London in the December 1915 obituary notice of his father William Williams in the Cambrian News. He died in 1918.