Angus Butterworth was a long term member of the Permanent Way gang from September 1974 to September 1995, when his job became redundant.[1][2] Before joining the permanent staff he was well known in Lancs. & Cheshire volunteering circles. After redundancy he continued living in the Porthmadog area. Angus died in late 2019 and his funeral service was on 12th December at Bangor Crematorium. Brother to Elspeth Butterworth (James Riordan) and the late Jennifer Fitzgerald (Kevin Fitzgerald); uncle to Kath, Michael, Pete, Brendan, Cavan and Bethany and great uncle to twelve nieces and nephews.[3] Donations were invited for the Ffestiniog Railway Society. 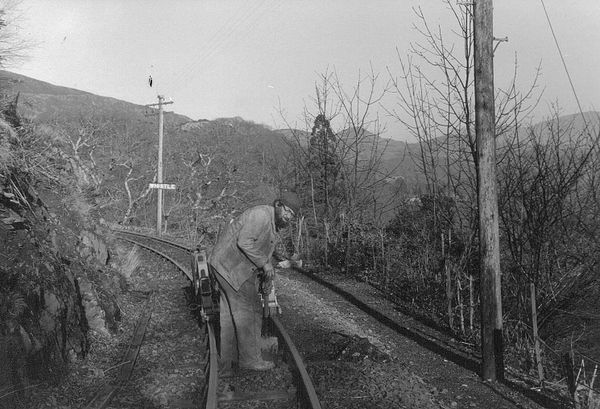 This picture shows Angus with the rail end straightener at Whistling Curve in January 1981.