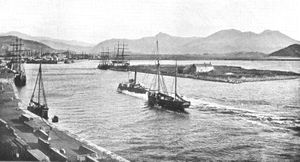 The tug Waveof Life towing a sailing ship with Cei Ballast on the right. Picture via Porthmadog Maritime Museum.

Cei Ballast is the man-made island in front of Harbour Station. It is home to a number of wildlife species. (There may have been a sand bank there previously, but the size today is purely man-made.)

It was created by the empty slate ships dumping their ballast before taking on a fresh load of slate. It was started in 1866.[1] It became so large that a number of mooring berths were situated on its landward side. These were against a wooden staithe (or quayside) the remains of which can still be seen.[2] There were on the island the inevitable narrow gauge tracks and wagons to move the ballast from the ships to be dumped on the other side of the island where the water was too shallow to berth sizable ships. It is likely that ships whose ballast was used on the FR permanent way were berthed on those landward quays of Porthmadog which had narrow gauge tracks which were connected to the FR and were able to get wagons very close alongside.[3]

Three brothers, Joseph, John and Evan Lewis, ship’s carpenters and block makers, built the wharf and maintained it. In older maps it is marked as Lewis's Island after a man, presumably one of the same family, by the name of Lewis who lived in a house on the island and operated a steam crane to unload ships. [4]

Cei Ballast is one of 43 (unbridged) tidal islands which can be walked to from the mainland of Great Britain at low tide. [4]