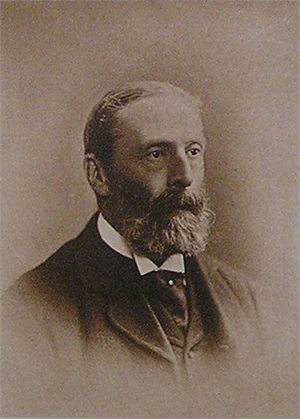 Holland claimed to be the designer of the first locomotives built for the FR.

In 1860 the Board of the Festiniog Railway Company realised that the railway, then operated by horse and gravity, was approaching its capacity. They therefore instructed the Secretary, Charles Easton Spooner, to investigate the possibility of using steam locomotives. They advised Spooner to consult with Charles Menzies Holland, the nephew of Samuel Holland, Junior (a quarry proprietor and one of the FR's largest customers). Charles Holland was an Engineer who was said to be acquainted with the subject.

After much correspondence, the contract to build the first locomotives was given to George England, selected partly because his works in London was near to where Holland was then working.

Holland's earlier designs were somewhat eccentric. England suggested changes to the design and pursuaded Holland to agree to a more conventional design. Holland stated in a letter (20/2/1863) to C.E.Spooner that he supported the changes because he believed England had the greater experience in locomotive design. Holland was paid £100 by the FR Company for his services.

He was on the footplate of one of the locomotives on the inaugural celebratory run on 23rd October 1863, but it was driven by William Hollinrake, one of George England's employees who became the FR's first Locomotive Superintendent. George England drove the other locomotive.