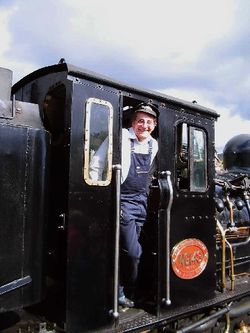 Clive on the footplate of 143

Provided material for the Quarryman's coach replica when he saw St Clare's Convent, alongside the A55 at Pantasaph being redeveloped by David McLean Ltd. Contacted them and asked them if they would consider donating some of the reclaimed timber to a worthy cause.

Currently the Team Leader of Team Wylfa – a multi-functional support group at Dinas on the Welsh Highland section of the FR family. Usually to be found checking and oiling the WHR’s carriages every Tuesday evening but the group also help on loco overhaul work during the low season and on the ex SAR Class NG134’s restoration.

Clive has family connections with the FR through his paternal grandmother dating back to 1891. He found the FR in 1960 and joined the Society and the Lancs & Cheshire Group in 1963. He began his volunteering efforts by helping man the L&C Group’s FR stand at model railway exhibitions in Birkenhead and Chester and undertook his first working party on the FR in 1964 – helping to rebuild a drystone wall at Tan y Bwlch (behind where the signal box is now) under the tutorship of a young Norman Gurley. Working on the PW with L&C Group working parties was to become a regular feature of his life until 1969, when, as an apprentice marine engineer with Liverpool’s Blue Funnel Line, he transferred allegiance to Boston Lodge. During his leaves between voyages, he did fitting and general overhaul work on the locos and carriages and gradually worked up to second man on the then passenger diesel loco, Upnor Castle and fireman on the Ladies or Mountaineer.

Volunteering slowed down whilst he raised a family but on several occasions, the family could be found in the Boston Lodge caravans and later, his 2 sons were participants in Kids Week.

Whilst a mature undergraduate at what is now Liverpool John Moores University, got the chance to do some major design work for the railway as part of his BEng degree. For the final 2 years, the degree required a 'design and make' project. The Professor allowed him free reign to design a replacement carriage bogie for the FR's carriages. The resultant design, and degree thesis, was submitted to the Design Council as an afterthought and won top prize in the 1989 Design Council competition - the Sir Denis Rooke Award. Boston Lodge has to date, incorporated several of the design features in replacement bogies from that date.

When a career move to Wylfa Power Station occurred in 2002, work was already well underway on rebuilding the WHR, in fact he had already helped lay track on Phase 2. When the new Betws Garmon river bridge arrived and needed painting in the spring of 2003, he and a work colleague volunteered after work and Team Wylfa began with more work colleagues joining the pair in subsequent weeks. Initially they worked on overhauling track clips and fishplates ready for the weekend tracklayers but also did some tracklaying. When Phase 3 to Rhyd Ddu opened, trackwork ceased but they asked to carry on in some capacity and were set onto stripping and assessing 134’s condition for its future rebuild. This included clearing out and equipping the former Dinas ‘clip shed’ and forming what is now the 134 restoration workshop. They were then moved onto various NGG16 Garratt overhaul work.

Phase 4 started rather unexpectedly and there were no serviceable RRMs (rail moving trolleys) so on an urgent basis, the best eight were selected, cannibalised and rapidly rebuilt. Then back to Garratts and eventually to the current main task, maintaining the carriages. Occasionally he has been seen firing a Garratt for good behaviour…

You are welcome to expand on this entry with any relevant material. Please annotate with sources of reference material