Cloister is an ex-Dinorwic Quarry Hunslet owned by the Hampshire Narrow Gauge Railway Trust that visited the Ffestiniog Railway in May 1999 and October 2000.

Built by Hunslet Engine Company of Leeds in 1891 (Maker's no 542) for the Dinorwic Slate Quarry at Llanberis and originally known as 'No 2', she was later named after the winner of the 1893 Grand National. Her job involved shunting slate wagons on galleries halfway up a mountain and she survived this arduous work until 1962 when sold to Mr. R.C.U. Corbett. Later Mr. Corbett most generously gave her to the HNG Society.

Cloister saw a few years use after 1969 but boiler problems resulted in withdrawal. She was overhauled over a long period, first at the Moors Valley Railway near Ringwood and later at Kew Bridge, where a new boiler was made for her. Since return to service in 1998, she has attracted much attention and has paid several, highly successful, visits to other railways. In 2009 Cloister moved to Amberley Museum, Sussex, to join HNGRT's other steam loco, ex-Dorothea Quarry Bagnall 0-4-0ST 'Wendy', remaining there until 2012. After a heavy overhaul including a new tank, Cloister was for a while operational at the Purbeck Mineral & Mining Museum near Wareham, Dorset.

Cloister made a return visit to the FR for Hunslet 125 in 2018 staring alongside many other operational Hunslet locomotives.

Following the dissolution of the Hampshire Narrow Gauge Railway Trust in 2019, Cloister moved to the Statfold Barn Railway. 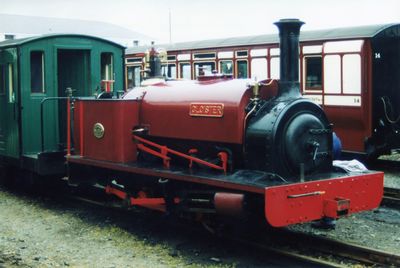 Some of the information about the visiting Hunslets is from the book "Quarry Hunslets of North Wales" by Cliff Thomas. Some from the Hampshire NGRS site.