John P. Roberts possibly taken in 1893 when he took over Duffws as Station Master

John P. Roberts, or John Roberts Pritchard, Station Master and Stores & Pay Clerk. It is thought that his middle name was probably Pritchard but that is not actually known. There is something of a mystery with this man. The 1871 & 81 census shows his name as John Roberts Pritchard and only in 1901 does it become John P(ritchard?) Roberts. His father was Morris Roberts, a Master Mariner, so why were he and his siblings called Pritchard? Later children were just Roberts.

John Roberts was born in Portmadoc in 1867. He married Ellen in 1910/1. He first appears working for the FR in 1893, aged 36 as Station Master at Duffws living at 37 Madoc Street, Portmadoc. This seems curious as you would expect him to be living in Blaenau. However, in 1911 he is given as Clerk in loco & carriage works living at Boston Lodge and in the photo (Boyd26H), he is listed as Stores & Pay Clerk.

John P Roberts is confirmed as the person in the photo known as Boyd26H. (click here to see) This photo is labelled "A Group taken in the Works Yard before the First War". It is believed to be around 1913. It is not all staff from the yard at that time. There was a list attached to the original which declares who the people are. This person is believed to be in the first row from the back and the first person from the left handside. 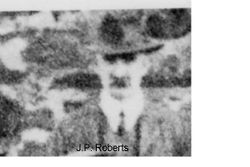