Porthmadog was primarily a place where wooden sailing ships were built and based and took away the slate. However in addition to a number of steam tugs it was also the home to three iron hulled steam coasters from 1864 to 1959. Even since then occasional loads have been delivered by motor vessels and one is scheduled in 2020.

Although Porthmadog owners had more than 150 sailing vessels in 1890 they never had many steam ships. Two locally famous steam coasters were owned by the Carnarvonshire & Merionethshire Steamship Company Limited of Porthmadog. From the 1840s there were 4 sailing ships operating weekly between Porthmadog and Liverpool. Samuel Holland Jnr. led a group of shopkeepers and businessmen who lived around Porthmadog and Ffestiniog in forming the company with a first Annual General Meeting in 1865. The company regarded dividends to shareholders as more important than good service to customers. Their two successive ships were both called Rebecca. They ran weekly from Porthmadog to Liverpool with a stop on the way at Pwllheli. Rebecca was bought in 1864. She was managed by Liverpool shipbrokers David W Davies and Co. and on her funnel were the letters D W D & Co. £8,000 was invested in the first Rebecca which at the time would have paid for six wooden schooners. There was more trade to and from Porthmadog where eight men were needed to unload and load the ship but at Pwllheli two men and a barge sufficed. From Porthmadog to Liverpool cargoes included oysters and iron goods from Britannia Foundry which would be returned South after galvanising if they were destined for shipbuilding.

Passengers were carried in competition to the railways because of the cheapness of a 5/- shilling fare but it was uncomfortable with cramped accommodation directly over the propeller. Strong stomachs were required for she had a long narrow shallow hull - essential for crossing the Porthmadog bar - but it made her roll. To save money she stopped using the Porthmadog pilots and her captain had to navigate her from Tremadog Bay over the bar and into Porthmadog Harbour. Salvage awards for helping ships in difficulty that she found on her passages were a useful little earner. She was re-engined by a Glasgow firm in 1886. A new ship, also called Rebecca, was ordered from Glasgow builders in 1894 at a cost of £6,000. Her top speed in trials was 10.9 knots and she was more comfortable for passengers. The original Rebecca was sold to owners based in the port of Ayre in 1896. She was later sold via Liverpool to an owner in France and renamed Le Gouet. She was wrecked on the Ile d'Oleronon to the South of La Rochelle when on passage from Morlaix to Bordeaux with a cargo of oats on 4th November 1907.

The company also owned another small steamer called Celt from 1906 - an ex-Clyde Puffer. She was probably used in place of the barge at Pwllheli to load Rebecca II. Both Celt and Rebecca II were sold in 1916 leaving Porthmadog at the mercy of the railway companies for transport to and from the town. The regular arrival of the steamer in Porthmadog on Friday mornings used to throw the town into busy activity as carts moved items to or fro between the harbour and shops and other local businesses. Rebecca II was sold to owners in Belfast then Ayreshire and London (renamed there as the Yorkglen) and was broken up in Southampton in 1930.

For a picture of REBECCA II see the web site of Porthmadog Maritime Museum.

Cooke's explosives plant in Penrhyndeudraeth was developed with booming demand during World War 1. The Florence Cooke was ordered in 1922 from Hepples of South Shields to bring in supplies bound for Penrhyn, and to carry away much of what was produced. The Florence Cooke sometimes went to a berth at the quay in Penrhyndeudraeth which was closer to the Cooke's factory. Explosives etc. were brought to the quay by Cooke's Explosives Limited's own lorry. She traded all around the British Isles including Liverpool, Scotland, The Channel Isles, Cornwall and the Tyne. Porthmadog was her home port. During WW2 she was used by the Admiralty at Milford Haven, Scapa Flow etc carrying munitions. She even took shells to supply Royal Navy monitors at the Normandy landings in 1944. She was released in early 1945 and traded the Bristol Channel before returning to Porthmadog. On 1st July 1957 she went aground off Borth-y-Gest and a picture in the 'Ship Aground' pub in Talsarn records the event. She failed to compete with road transport for delivery of cargoes around the Bristish Isles and was sold to Dutch shipbreakers in 1959.

From the 1960s to the 1980s occasional large loads were landed by ship at Porthmadog. For the purpose the Central Electricity Generating Board erected a very large crane on one of the most southerly of Porthmadog's landward quays. The purpose of this was to bring in big items such as transformers, generator parts etc which had to be taken to the power stations at Trawsfynydd or Tanygrisiau and were too large to easily move by road or rail. To see a picture of a load arriving for the CEGB and being unloaded by its large crane see here. In 2020 NorthWalesLive reported that a transformer for National Grid at Trawsfynydd would be delivered to Porthmadog in April by a large ship believed to be from Croatia. The pontoons used by yachtsmen were planned to be temporarily moved and moorings lowered to the sea bed. This delivery was delayed by Covid-19 and bad weather and in early September 2020 the plan was to deliver it by barge to the beach at Blackrock Sands on 16th September and thence by road to Trawsfynydd. At Blackrock Sands rails were to be laid on the beach to facilitate its movement. So even this very occasional use bypassed Porthmadog Harbour. 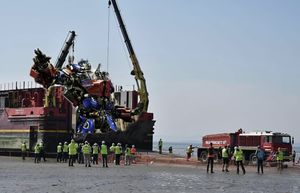