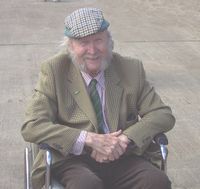 Alan Francis Pegler OBE, FRSA (16 April 1920 – 18 March 2012) was a businessman, entrepreneur, railway preservationist and actor. It was Pegler who provided the money required to transfer ownership of the Festiniog Railway Company to the new regime, allowing the railway to be revived in the 1950s.

Later he became known for purchasing Flying Scotsman from British Railways. The locomotive's subsequent American tour bankrupted Pegler, who then took up acting and public speaking.

Pegler, who continued to be president of the Festiniog Railway Company and the Ffestiniog Railway Society until his death, was appointed OBE in the 2006 New Year Honours in recognition of his contribution. (more...)