Palmerston is a steam locomotive built for the Festiniog Railway in 1863. One of the line's original locomotives, it continued in use (much rebuilt) until the mid 1930s. The locomotive was then converted into a stationary boiler for war work at Boston Lodge.

The new management considered the remains to be beyond restoration. The hulk was sold in 1974 to a private consortium. It later returned to the FR and was restored to service in 1993. It is not one of the line's regular locomotives but can be seen working on special occasions. 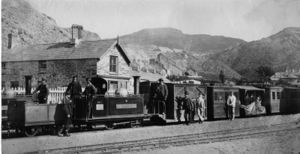 Palmerston and The Princess at FR Duffws c 1870

Palmerston is (probably) the fourth of the first four FR locomotives built by George England & Co. at Hatcham Iron Works. It is now numbered 4, but there is doubt about the order of building and numbering of the first four England engines. As originally built it was side tank locomotive with an open footplate.

At the start of the maintenance books, in December 1874 Palmerston is in the works awaiting ferrules for a second hand set of boiler tubes (from Little Giant). They arrived and were fitted, 4 months later!

Palmerston was sent to Llanwnda (Dinas) in May 1876 to help with the construction of the NWNGR. By September the record shows that a man had to be sent from Boston Lodge to repair 'her'. The list of materials required was "a set of brasses, set of brake blocks, 6 piston rings & 4 split pins". Palmerston returned to the FR on 9th July 1877. On return, there was a long list of repairs including wheel turning, new pistons and piston rings, crankpins, neck rings, piston cotters, closing up slidebars, closing up eccentric straps,link motion overhauled, axle boxes refitted, reversing lever and quadrant overhauled, 4 mudholes re-tapped, new brakeblocks, new gauge glass and valves set up. It wasn't until 30th July that the engine was fit for traffic. 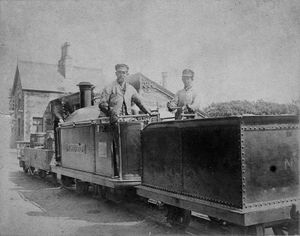 By 1879 the tyres were working loose, they tried fixing them with steel pins in October but by December the tyres had been replaced by those of Mountaineer. The cylinders then started to go, a brass patch was fixed on a cylinder, but it didn't hold, the cylinder burst in March 1880. A major refit followed with the cylinders, the smokebox, the sandpots, the crossheads and slidebars all being replaced. It was fitted with 'sham' saddle tanks made from cast iron (weighing 24cwt) to improve adhesion. The first of the original engines to be treated this way. Two new whistles were put on (only one previously). A year later it had a lubricator put on. From December 1881 there is a constant comment that it needs retubing, but in the end it was withdrawn for a complete new boiler in 1886.

The engine re-entered traffic in September 1888 and became the first of all the England Engines to be rebuilt with both a saddle tank and an enclosed cab. In 1889 it was fitted with "new sanding apparatus" which seems to be steam powered. On 13/12/90 the works recorded "Repairs required after Engine leaving rails at Tanybwlch through carelessness - all hands 14 days repairing". In 1891 the cylinders were recorded as being "in a very bad state". The valve port bridges were cracked and a piece of iron was bolted in. However this was to no avail, the cylinders finally failed in April. As part of the rebuild the opportunity was taken to shorten the length of the cab by 8 inches to enable it to have better access to the wharves at Portmadoc. Palmerston seemed accident prone in the 1890s. In 1892 an axle broke (replaced by one from Little Wonder). In 1895 it was damaged "by running into Quarryman's train at Oakleys curve". In 1897 it was damaged at Glanypwll in July and at Minffordd in December. Because of this it was probably the most painted of all the England Engines! being painted in 1894, 1895, 1896 & 1900 (also revarnished in 1890, 1893 & 1897). In 1900 it was retubed with Red Metal tubes from Livingston Thompson. From 1905 it started to get leaks from the firebox and it is recorded as coming out of service in October 1907 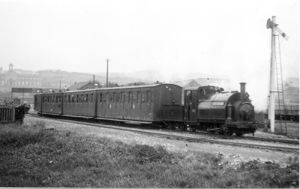 1910-1920s: Rebuilt again and hired out for use elsewhere[edit source]

It was rebuilt in 1910 with a Low Moor Iron boiler, re-entering traffic in June of that year. The cab and tank were set 1 1/2" higher and a new balance weight fixed to the front footplate. The Williams book records "This Engine is practically new, all parts being repaired or renewed". The following year the axle from Little Wonder broke and the engine was repaired at Glanypwll, with the wheels, rods and eccentrics sent to Boston Lodge for refitting.

Between 1912 and 1921, Palmerston was hired to the Vale of Rheidol Railway on a number of occasions:

In 1923 Palmerston was used in the construction of the WHR, being loaned to the contractor McAlpine from 9th May 1923 until a few days after the line was opened. In the late 1920s it was photographed at Porthmadog coal stage with the front axle having disc wheels (ie from a Large England) 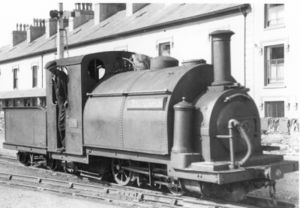 The locomotive worked until May 1930 when the boiler was inspected. It really needed a new boiler, but in between April and August 1933, the boiler from Little Giant was cut shorter and fitted and it then worked until 1937. Quotes were sought to replace the firebox but they were not taken up. In 1942 was used as a stationary boiler for the Glaslyn Foundry at Boston Lodge Works ( Glaslyn Foundry had taken over operation of the Boston Lodge foundry & works for war purposes). Parts from it were used in the 1955 restoration of Prince.

Palmerston had a near escape in the late 1950s. Volunteer Ian Waters was busy cutting up redundant slate wagons for scrap. Allan Garraway said to him one day "When you've finished with them cut up that" pointing at the derelict Palmerston. He was forever thankful he disobeyed this instruction especially when later he saw it fully restored.[2] 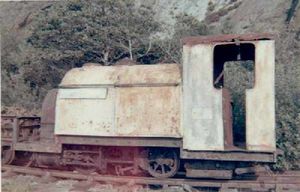 Palmerston has an interesting aside at this point. In FRM-027-025 (Winter 1964/65) Francis Wayne (the FR Co. Sec) put a note in to dispel rumours that a long-term decision had been made regarding painting or varnishing carriages. The reason for trying varnish was maintenance and the lack of skilled painters. So they were going to varnish No 24 and No 100 that year, and see how it went. At the end of his note, he said: "Finally, may I add, there is absolutely no truth in the rumour that Palmerston is to be painted Pink and re-named Harold Wilson."

By FRM-029-005 (Summer 1965), it was noted: "Some humourist(s) decided to contradict Mr Wayne in Magazine 27 and Palmerston duly appeared in pink paint with Harold Wilson on the nameplates for A.G.M day. Perhaps it might have been more appropriate to paint such remains blue and name them Ernest Marples!"

The pink livery bore the signature AJR and the year 65 on the bottom corner of the tank next to the cab. It is believed that the initials AJR refer to Alan Ramage (1943-2016), at that time 22 years old.

But by the late 60's what was left was considered beyond repair..

Palmerston was sold for £450 to a consortium of five British Rail engineers in 1974. They removed it to Staffordshire on 21/7/1974, together with a wooden framed tender that had also done service as a coal wagon (number 38) and then with Linda & Blanche as each was first put into service on the FR following arrival from the Penrhyn Quarry Railway. They began to restore Palmerston, but progress was slow. The partially restored Palmerston came under the control of Mike Hart who moved it back to the FR in 1987. The final stages of its restoration, including the fitting of a new welded boiler, new cylinders and new wheels were completed at Boston Lodge. The old wheels are still in Minffordd yard.[3] 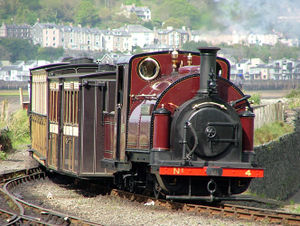 1993-Present: Back in service[edit source]

Palmerston re-entered service in 1993 as a coal-fired locomotive, for use on special trains and charters. In 1994 it visited the Chemin de Fer des Chanteraines (external link) in Paris, visiting Hollycombe in Sussex en route, and the Teifi Railway (external link) in mid-Wales.

In 2000 Mike Hart donated Palmerston back to the Railway.[3]

In 2003, Palmerston was withdrawn for overhaul and retubing by a team of volunteers, returning to service in 2005.

In autumn 2005 Palmerston was fitted with a new spark arrestor as part of wider coal firing trials. This was deemed a success with the loco steaming well whilst not throwing any sparks. On 9th September 2006, Palmerston become the first steam locomotive to run on the re-instated WHR phase 4 track at Pitt's Head. Palmerston was helping celebrate the 125th anniversary of Rhyd Ddu station, carrying out demonstration runs with Mike Hart's Simplex. Palmerston was the first steam locomotive on this section for 69 years. The locomotive's appearance commemorated its use on both NWNGR construction and WHR construction hire duties (See image at bottom). Palmerston was again on its travels in early 2007 with a visit to the National Railway Museum at York. On 27th October 2007 Prince and Palmerston became the first England Engines to get to Cwm Cloch on Phase 4 in over 71 years, for a photographic special.

Palmerston spent May 2008 in West Sussex at the Hollycombe Steam Collection (external link), exchanging places with Hunslet Jerry M. On 24th October 2008 Palmerston and Prince became the first England engines through the Aberglaslyn Pass in 72 years for a photographic special. In 2012 the locomotive was run on a temporary track at the Llangollen Railway gala alongside Dolgoch of the Talyllyn Railway. In June it was running at the Railfest Exhibition at the NRM with two carriages.

During 2015 Palmerston had its ten year boiler overhaul. It was repainted in a lighter colour to make it more photogenic especially on dull days.

In February 2017 Palmerston visited Kings Cross station in London with carriages 1 and 12 in order to generate publicity for the railway.

In 2018 Palmerston visited the Bala Lake Railway to cover that lines service trains whilst its entire home fleet visited the FR for Hunslet 125.[4]

The condition of Palmerston's chassis deteriorated for years and so the loco was restricted to low mileages. During the middle of 2020, using funds from the FR Society, Palmerston was given a chassis overhaul and is now back in good order. This marks the first time in recent history that three England Engines have been in service. During the remainder of the year, Palmerston was used on the Tan-y-Bwlch trains, running due to Covid-19. [5]

Principal dimensions are the same as Prince but the rated pressure of the new boiler is 180psi instead of 160 and it is rated to haul 4 carriages on the FR. The maximum speed is limited to 18 mph.