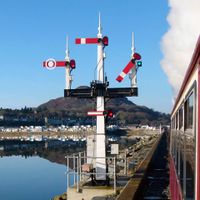 Over the years a great variety of signals and signalling practices have been employed on the Ffestiniog Railway. The earliest signalling installed in the 1860s and '70s was of a distinctly old fashioned appearance yet much of it remained in use until the 1920s. Later on more modern semaphore schemes were introduced. Much of the signalling fell out of use in the 1920s following the granting of a light railway order.

Following the revival of the railway the new management made efforts to install more modern signalling. The early efforts were influenced by the Military Railway at Longmoor using flagboards at stations and a central control office. As resources became available more elaborate signalling schemes were implemented at stations using both mechanically operated semaphore signals and automatic colour lights. The signalling of the FR continues to develop and the 2014 resignalling of Harbour Station using electrically operated replica semaphore arms set a new high standard of quality. (more...)