Later appointed general manager, Garraway was regularly seen out on the line, usually driving Linda. He continued to manage the FR until the completion of the line's reopening to Blaenau Ffestiniog in 1983. In retirement Garraway moved to Scotland and continued to be involved in railway preservation. He died in 2014.

The son of R.H.R. (Ron) Garraway, Allan Garraway was born on 14th June 1926 in Cambridge. His father was District Locomotive Superintendent at Cambridge shed so Garraway was introduced to steam locomotives from an early age.[1] He was educated as a boarder at the Leys School Cambridge (School House, 1939 - 44) which was evacuated to Pitlochry in Scotland where he became Mate of the Rover Scout troop. This, no doubt, was a reflection of his leadership potential recognised at an early age.[2]

Having obtained his degree at Cambridge University (St Catherines College) in 1947, Garraway served with the Royal Engineers in Germany where for a while he was loco superintendent on the Detmold Military Railway.[3] On release (having attained the rank of Captain), he trained on a special two-year course at British Railways Doncaster Works. He then spent time at Neville Hill where he gained a reputation for setting valve gear. Garraway was later appointed an assistant to the Motive Power Superintendent, Eastern Region, British Railways, with particular responsibilities for Automatic Train Control (ATC) matters. During his period working for BR he was a member of 157 Locomotive Running Squadron in the Army Emergency Reserve and attended annual training camps at Longmoor. His Army connections would later come in useful in getting help for the FR (relaying from Tan y Bwlch to Garnedd Tunnel and erection of the 1964 loco shed steelwork in Glan y Mor yard). It would also lead to strong Longmoor influence on the FR's Central Traffic Control. 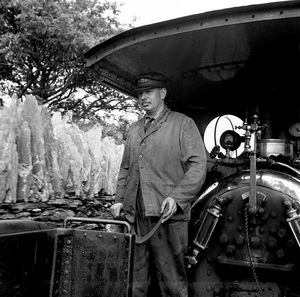 In 1951 Garraway met Bill Harvey who was visiting Stratford to inspect the new BR 7MT Britannia pacifics. Harvey suggested Garraway join him for a week's volunteering on the Talyllyn Railway (though he was already a TR Society member).[1] In July 1951, while working in the TR's locomotive department, they travelled up from Towyn on Garraway's 350 cc BSA motorcycle and explored the Festiniog Railway from the Dduallt area to the Moelwyn Tunnel and down to Tan y Bwlch as well as visiting Boston Lodge and Portmadoc. Seeing the FR track they both agreed that this was the railway they should be working on![4] Whilst at the TR Garraway was involved in keeping the venerable Dolgoch running until other motive power could be found.

It was just weeks later that the Bristol Meeting which founded the FR Society took place. After attending that meeting, called by Leonard Heath Humphrys, Garraway played an active role in the foundation of the Ffestiniog Railway Society and recorded how having the FR Company taken over by Alan Pegler "was not quite what we had originally wanted, but we felt that after over two years of frustration (trying get the Society to take over the FR) this was going to be the best way to get the railway going again, and we accepted."[5] Garraway was one of the first volunteers on the revived Festiniog Railway in 1954, and was appointed engineer in November.[6] Allan was unimpressed by BR's modernisation plan and it was to be just 18 months later at the beginning of June 1955 that he left BR and took up the post of full-time Manager and Engineer to the Festiniog Railway Company shortly before passenger services resumed in July. He was required by Alan Pegler to give up his role in the FR Society of which he was a director until late 1955.[7] He was appointed the first General Manager of the revived company in 1958.

For many years Garraway lived in the flat he adapted from the company offices and board room in the upper floor of Harbour Station including (for a time) after his wedding to Moyra in 1965. While a bachelor he had his meals provided by May Jones just across the road; she became an FR institution, providing meals and B&B for a variety of volunteers and long term temporary staff. Eventually "living above the shop" became uncomfortable for the Garraways so they moved to a bungalow in Minffordd.

Garraway's engagement to Moyra McMillan was announced in the Spring edition of Festiniog Railway Magazine in 1965[8] and the wedding took place on 23rd October 1965. After the service at St Mary's Church, Tremadoc and the reception at the Commercial Hotel, Portmadoc, the newly married couple travelled by special train to Tan y Bwlch hauled by Prince driven by Bill Hoole.[9] There were various excitements on the journey, varying from the usual detonators, to padlocked level crossing gates with non-standard padlocks (at Lottie's crossing) and locals waving flags at Penrhyn. Bill insisted on Moyra assisting on the footplate - with smutty results for her dress.

As an active General Manager, 'AGWG' took his turn on engine driving duties from the early days of revival until about 1974, with Linda as his favoured steed. His unmistakeable figure, patrician, straight-backed, and often dressed in oilskins, was routinely observed on Linda's footplate on afternoon trains in this period. This was not only a duty he enjoyed, but it served him well as a frequent tour of inspection of what was happening out on the line. It was said that from his vantage point he enjoyed the bracing air (and rain) of North Wales, and it was suspected that it was no coincidence that Linda was not fitted with a tender cab similar to that with which Blanche was equipped.

Garraway was also involved in the mid 1960s with Virginia, a steam pinnace (a small steam vessel) so he saw Portmadoc from landward and seaward. Another hobby was Gilbert and Sullivan light operas. In addition he had a O-gauge model railway following on from the gauge '1' railway that his father ran from 1909 to 1964. Garraway's layout started in 1930; it was fitted into the loft at Harbour Station and it later moved to Boat of Garten. A speciality was beer trains that might bring rewards to visitors who proved to be good operators of the intricate lever frames for the points and signals.[10]

By the late 1970s it became clear that the board wanted someone with more business skills to lead the company and in 1979 Dick Wollan was employed as chief executive to oversee the company's business affairs with Garraway continuing to oversee railway matters. In 1979 Garraway was awarded a well deserved MBE in the Queen's Birthday Honours. He stepped down as general manager in 1983, his last day in office coinciding with the official ceremony to mark the railway's reopening to Blaenau Ffestiniog. He continued as a part time consultant until he finally retired in 1986.[6]

Allan Garraway was instrumental in encouraging a significant number of preserved railways to adopt Longmoor (Royal Engineers) railway operating practices. A particular legacy is that the FR's graph-based train control system is more or less pure Longmoor, as was the flag-based signalling system used at intermediate stations in early restoration days.[11]

Garraway made numerous contributions to the FR Magazine, but a particularly notable set of three articles records early efforts to revive the FR up to the running of the first passenger trains in 1955, with detailed explanations of struggles to get the Simplex to operate.[12] 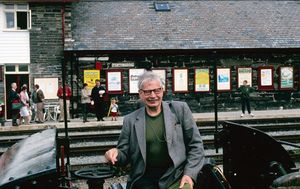 On The Simplex 1995. Photo: Peter Johnson

Garraway's retirement to Boat of Garten in Strathspey, Scotland, followed a growing connection with the Strathspey Railway but was also in an area he had come to know as a schoolboy and on holidays. In his mid sixties he revived his interest in rowing which took place on the Caledonian Canal; between 1989 and 2002 he made 1,091 outings with the Inverness Rowing Club.[13] Garraway's interest in rowing had started at Cambridge University, was pursued a little in Germany and had been continued at the Oakley Rowing Club based at Hammersmith, a section of the GN Athletic Association, when his BR work took him to London. From Scotland one of his later actions was to write in 2011 to the FR General Manager enclosing a donation to start the fund for the restoration of Welsh Pony.

Allan Garraway died in his sleep aged 88 at Newtonmore on 29th December 2014. His prominent role in the heritage railway movement resulted in fulsome tributes in national and regional newspapers. 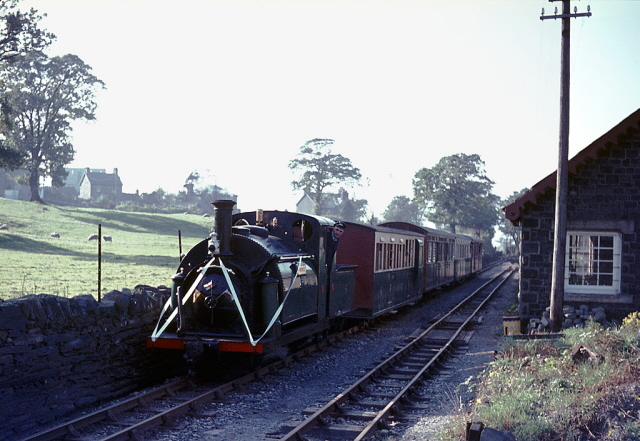 Lambert A (1955) Arthur Lambert's reminiscences of the early years of the FR Society quoted in FR Chronology page 119.)