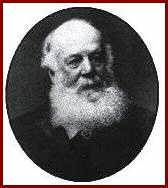 Charles was the third son of James Spooner and was born in Maentwrog in 1818. As a teenager he, along with his oldest brother, James, assisted his father in laying out the Festiniog Railway. He and James continued to assist their father and Thomas Prichard during construction. Charles was thus trained as a civil engineer, gaining much practical experience that would stand him in good stead in his later life. During the early 1840s, Charles' training continued under both Joseph Locke and Isambard Kingdom Brunel. He continued to be involved with the railway under his father, who was Secretary to the Company. (more...)