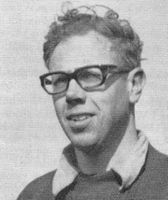 Norman Gurley was a stalwart of both the Ffestiniog Railway and Society for many years. He worked for the FR as a volunteer from 1955 and was often joined by his sister Hazel. He was also involved with the society as a director and worked on the magazine. He joined the full time staff in 1963 in the permanent way department. He later worked in the booking office and for Ffestiniog Travel.

He was born in 1932, brought up in Watford and by the mid-1950s he was working as a progress-chaser at the Scammell lorry works in that town. As a child he was interested in aircraft. It was while watching aircraft near Watford tunnel that he saw two "Princess Royal" class locomotives emerging from the tunnel with a wartime express of 20+ coaches. He was deflected to an interest in railways and had seen much of what there was to see on British railways by the time he reached Boston Lodge in 1954 (when according to the rumour the FR was about to be reopened to help the Electricity Board build a power station!). (more...)