Norman Gurley was a stalwart of both the Ffestiniog Railway and Society for many years. He worked for the FR as a volunteer from 1955 and was often joined by his sister Hazel. He was also involved with the society as a director and worked on the magazine. He joined the full time staff in 1963 in the permanent way department. He later worked in the booking office and for Ffestiniog Travel.

He was born in 1932, brought up in Watford and by the mid-1950s he was working as a progress-chaser at the Scammell lorry works in that town. As a child he was interested in aircraft. It was while watching aircraft near Watford tunnel that he saw two "Princess Royal" class locomotives emerging from the tunnel with a wartime express of 20+ coaches. He was deflected to an interest in railways and had seen much of what there was to see on British railways by the time he reached Boston Lodge in 1954 (when according to the rumour the FR was about to be reopened to help the Electricity Board build a power station!).

Early work for the Festiniog Railway[edit]

His first role in the Festiniog Railway Society was the result of an appeal by the secretary in 1955 for an envelope addresser.[1] His title was Hon. Distribution Manager and he retained it for 42 years. He was involved with the London Area Group (LAG) committee from the outset, as the first secretary and was in 1959 Exhibition Secretary and for some years the Working Party Organiser. For an account of organising the first working party see The Pioneers' Story.[2] He was co-opted onto the Society Board in 1957. In 1961 he offered to help with the administrative side of the of the FR Magazine and suggested Dan Wilson become responsible for the creative side of editorship. In the Magazine notice reporting his appointment as a joint editor he is described as "that zealous young man".[3] He was involved with the production, including checking the proofs and mocking up the layout of each issue, and distribution and was listed for many years as joint editor with Dan Wilson. Dan did most of the writing and Norman most of the administration although there was flexibility. It was a very fruitful cooperation as Dan's occasional editorial excesses were restrained by Norman's caution. Dan's inventive writing was set off by Norman's wonderful photographs. The partnership lasted from Magazine No. 14 in 1961 to No. 93 in the summer of 1981.

Norman was a Director of FR Society from October 1957 until 1963, when he resigned on taking up his permanent staff post as platelayer. Because he ran the registry of Society names and addresses he was for years an essential link for Society post holders. If they wanted to know where a member could be contacted they rang Norman. There was a perk in knowing volunteers all over the UK and access to the Society's members' contact details - Norman could cadge a bed almost anywhere in the UK. 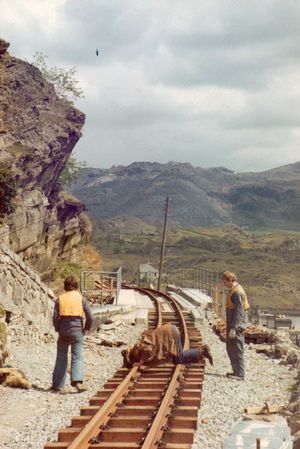 Norman Gurley in classic ganger's pose at Dolrhedyn Bridge, May 1981

He gave up his day job with Scamell and moved up to North Wales permanently in 1963. The LAG was always associated with permanent way work so it was fitting that Norman should become a platelayer on his move to Wales. However, from the beginning of his time on the staff he worked when needed in the busiest weeks for traffic as a booking clerk or guard. In his early years on the FR he shared houses with other members of staff, one of which was on the Garth in Porthmadog.

Norman was commonly the driver of the Wickham trolley in the mid nineteen sixties. It was stored overnight in the Porthmadog goods shed and he would drive it to at least Minffordd, where the ganger Ron Lester lived in the station, picking up staff and volunteers from Boston Lodge, Bron Madoc crossing etc. Norman often wore a beret which was unusual among the flat caps of the PW gang. He was very dedicated to the FR. He used to say that when he started working on the FR you could afford only one of house/car/wife. Later when the wages improved a little he would say that FR staff could afford only 2 of wife/house/car. His choice was a cottage in Llan Ffestiniog and a mini van.

Norman was someone who understood the Society and the Company and its employees very well. He had the interests of the whole FR family to the fore. In Summer 1978 the Magazine reported a statement from the Lancashire and Cheshire Group about deteriorating industrial relations between the FR Board and the permanent staff. The same copy of the Magazine contains a letter from Norman pouring oil on the troubled water, and pointing to the main causes of poor staff morale being high inflation and the incessant delays and unrealistic planning which plagued the building of the New Moelwyn Tunnel.[4]

Before volunteering on the FR Norman had been ill and his treatment made him somewhat deaf, especially at the higher frequencies employed by female voices. His deafness was partly responsible for him leaving PW work in his middle age since it had safety implications. He finished with PW in 1983 and transferred to the Booking Office where with the aid of ever more powerful hearing aids he was able to operate effectively.

Norman was presented shortly before his retirement at the 1997 AGM with a framed print of the Terence Cuneo Tan y Bwlch painting and a commissioned painting of a train at Dduallt by Dave Charlesworth from the Society, Trust and Company in recognition of his long service and dedication.[5]

There is an article in Ffestiniog Railway Magazine in which Norman remembers aspects of his thirty four years of employment on the FR.[6] It is illustrated with quirky photographs and photographs from unusual vantage points. One such is from the roof of the Bunny Hutch at Tan y Bwlch which at the time he was felting. He quite often worked inside it selling guides, souvenirs etc.

Other interests and later life[edit]

He was a keen photographer and took countless pictures of the Railway, both in black and white and in colour. As a platelayer he visited every location on the line and quickly spotted new and unusual vantage points from which to photograph the trains. His pictures have graced many a railway publication and, indeed, continue to do so. He was the Official Photographer for the Railway, and compiled the photographic album Narrow Gauge Steam Out of Portmadoc.[7]

Norman was a member and staunch supporter of Deudraeth Camera Club for some 40 years and keenly joined their competitions although usually with subjects other than railways.

Once semi retired he spent the winter months in New Zealand where his sister and her family live, but, for the summer, he was back in Wales again.

Sadly, Norman died in 2004. His ashes are scattered by the lineside at Tunnel South at a spot which can be seen across the valley from his house in Llan Ffestiniog. Look for a triangular memorial slate on the hill-side at the start of Tunnel South Cutting, just up the line from the gabion boxes. [8][9]