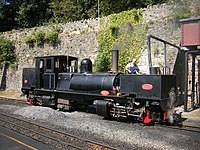 The rebuilding of the Welsh Highland Railway provided somewhere where K1 could run again and, starting in 1995, it was rebuilt as the flagship locomotive of the revived railway. The rebuild was completed in 2004 and after a period of testing it began hauling passengers in 2006. (more...)