From Festipedia, hosted by the FR Heritage Group
(Redirected from Aberglaslyn (Old WHR))
Jump to navigation Jump to search

The Aberglaslyn Pass is one of the better known natural features of the district. It is a river-cut steep-sided valley which drained a large lake which covered Beddgelert after the Ice Age. There is barely room for a rather substandard road on the west side and the Welsh Highland Railway runs on the east, passing through Tunnels T2, T3, and T4 (the long tunnel) on the way.

There was tremendous controversy in the 1900s about the line, with Mr Lloyd George visiting the spot and speaking with the objectors, and Mr Churchill signing the Light Railway Order, but further trouble arose when it was discovered that the politicians had designed a railway through thin air. The line was adjusted, the National Trust agreed to it and the signature of their Secretary-General is on the original document held in the Public Record Office. So it was entirely irregular for the NT to oppose the line at the Public Inquiry in 1996-7; fortunately this has all been sorted out and we are now all the best of friends.

At the top of the Pass, the railway enters the scene under the new A498 bridge built by Gwynedd Council. This bridge is narrow and has an awkward bend with poor visibility from both sides: there is no footwalk, so photography from this spot is not recommended. The railway then runs across the first of three identical 75ft Warren girder bridges, this one across Afon Glaslyn. The three were designed by John Sreeves and built by the Brunswick Foundry at Caernarfon for about £100k each. Upstream of the railway bridge is a new footbridge which ran into trouble soon after construction because the east abutment was rapidly scoured by the river. Afon Glaslyn is a powerful torrent draining the south side of Snowdon, the east side of Moel Hebog and the hills on the south-east side of Nant Gwynant; the water can rise to the level of the railway bridge and there are flood relief culverts which we hope will prevent it flooding over the railway embankment and causing flooding back to Beddgelert.

Although the line is generally down hill, there is a slight rise north of Tunnel No.2 which was caused by the politically inspired changes by Mr Lloyd George and Mr Churchill. There is a sharp bend in Tunnel No.3 occasioned by our promise to the National Park that we would not alter the tunnel; at least it is a valid reason for slowing to allow passengers a view of the Pass.

The line then runs through No.4 Tunnel (or Twnnel Mawr) which is 300 yards (284m) long and emerges into Cwm Bychan next to Nantmor.

During the FR tenure (1934-6), the station at Nantmor was renamed Aberglaslyn. 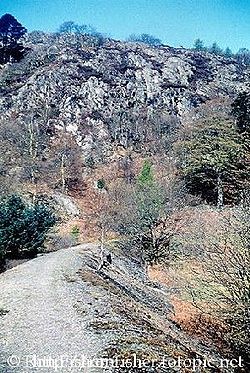 Ron Fisher's picture (left) shows the embankment across Cwm Bychan. On here, in 1958[1], a camera railway was erected for the filming of The Inn of the Sixth Happiness starring Ingrid Bergman. An entire Chinese village was set up in the valley by the embankment (on the right of the picture) and a wonderful choice of Liverpool Chinese people came to inhabit it for the summer. The singing of these Chinese children, in a strong Scouse accent, remains an enduring memory.