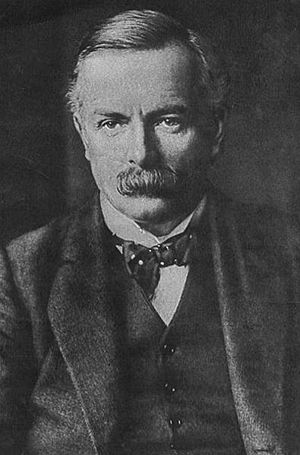 Although born in Chorlton-on-Medlock, Manchester, England and therefore a Mancunian by birth, Lloyd George was a Welsh-speaking man and Welsh by descent and upbringing, the only Welshman ever to hold the office of Prime Minister in the British Government. In March 1863, his father William George, who had been a teacher in Manchester and other towns, returned to his native Pembrokeshire due to failing health. He took up farming but died in June, 1864 of pneumonia, aged 44. His mother Elizabeth (1828-1896, daughter of David Lloyd, shoe maker and Baptist pastor, of Llanystumdwy, Caernarvonshire), sold the farm and moved with her children to her native Llanystumdwy, where she lived with her brother Richard, a master cobbler and later a lay Baptist preacher who, as a strong Liberal, proved a towering influence on the boy, encouraging him to take up a career in law and enter politics; his uncle remained influential up until his death at age 83 in February 1917, by which time his nephew was Prime Minister. His childhood showed through in his entire career, as he attempted to aid the common man at the expense of what he liked to call "the Dukes". There were three children; Mary Ellen was his elder sister and William was born posthumously to his father in 1865.

Articled to a firm of solicitors in Porthmadog, Lloyd George was admitted in 1884 after taking Honours in his final law examination and set up his own practice in the back parlour of his uncle's house in 1885. The practice flourished, he established branch offices in surrounding towns and took his brother William into partnership in 1887.

On 24 January 1888, he married Margaret Owen, the daughter of a well-to-do local farming family. Also in that year he and other young Welsh Liberals founded a monthly paper Udgorn Rhyddid (Trumpet of Freedom)

In 1889, he became an Alderman on the Caernarfon County Council which had been created by the Local Government Act 1888. At that time he appeared to be trying to create a separate Welsh National Party modelled on Charles Stewart Parnell's Irish Parliamentary Party and worked towards a union of the North and South Wales Liberal Federations.