Buffet car duty is the work carried out by the staff and volunteers manning the Ffestiniog and Welsh Highland Railways' Buffet Cars. The buffet cars form an important part of the railways' ability to provide customer service and generate revenue. The work of a buffet steward includes reporting for preparation of the train for departure, the selling of guide books, taking and delivery of orders, collection of rubbish and cashing up. On the Welsh Highland Railway, there is also the cooking of hot food to be completed. Traditionally, buffet duty is the first role assigned to new volunteers who are later looking to become guards.

Thibault Dupuy and Andrew Perkins on buffet steward duty in June 2015. Dress code leaves a little to be desired but perhaps it was right by the time the train departed. The buffet car stores are through the door on the extreme right. Photo: Mark Temple

Buffet stewards on the FR and the Porthmadog end of the WHR typically report for duty 45 minutes before their first rostered train is due to leave Porthmadog. The buffet stores and office are at the end of the Harbour Station building near the buffer stops (before the toilets!) and the buffet cars or service vehicles are generally near the Caernarfon end of the train. This means with a train parked in its normal position in Platform 1, the buffet car is close to the stores. A trolley is available to transfer stock to trains in Platform 2. At the Caernarfon end of the WHR, at least one steward will report to Dinas where the stores for that end of the line are located. Other stewards may meet the train at Caernarfon or join the ECS at Bontnewydd.

Putting on board the stores, which a previous crew have marked on the re-stocking sheet as required, is one of the first jobs. In the stores are all the materials needed to run the on train catering set out on racking with everything from wooden cup stirring sticks to bottles of beer, and all the things indicated on the re-stocking sheet must be loaded on board. The largest items to load are the containers of hot water that have been heated up by being plugged into the electricity mains to power their built-in heating elements. The containers are insulated and remain hot enough to serve hot drinks on a round trip on the FR. Traditionally they are loaded at the last minute as the old style buffet cars have no power supply to retain the heat; however the advent of the Service Cars which have a power supply means this is no longer strictly necessary. 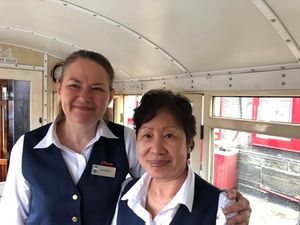 The number of stewards rostered on a train depends on likely demand, but usually volunteers work with at least one of the seasonal staff and when the trains are busy more than two stewards are required to give good service. WHR trains have a rostered chef in addition to the buffet stewards to provide the hot food service offered on that line. The buffet crew leader for the day collects the float and the record sheet from the booking office before the train leaves Porthmadog or Caernarfon. 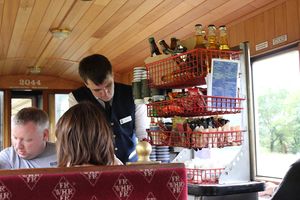 Before the train departs the preferences of the footplate crew for drinks are written down so that they can be delivered at the appropriate point on the journey (usually Tan y Bwlch and Blaenau on the FR). Guards usually help themselves to drinks as they pass through the buffet car. One of the first jobs on leaving Porthmadog is to walk through the train selling guide books. The steward usually walks up the platform and boards the far end of the train before departure. If there are non-corridor coaches at the head of the train these can be visited with the guide books before the train departs. Selling more than 12 guide books on a train is quite a good result - and at £5 each the revenue soon adds up.

Meanwhile, the other buffet stewards begin the task of serving the passengers with any refreshments they care to order. There is a menu with prices on every table on the train as the passengers board. On the FR, stewards walk along the train with a pen and pad to take orders. Carriage numbers and seat numbers make it easy to note the location of each person making an order. Then the steward returns to the buffet car to put the drinks and food on a tray. The skilful part of the job is carrying a loaded tray along the train and through the corridor connections without spilling anything. Small children and dogs occupying the aisle add to the fun. FR corridor connections present a challenge - some have swing doors, some slide one way some the other and the roof is carefully designed at a height to collide with the top of the head. Passing through corridor connections at Tylers, Dingle and other sharp curves is best avoided. Any contact with the sides of the corridor connection blackens the steward's shirt as there is a deposit of smuts from the locomotives.

One might think that a heavily loaded tray would be most difficult to carry, but experience shows it is a lightly loaded tray that is more likely to spill its contents. Once the order is delivered to the passenger, then they are asked for the price of their order. Stewards generally price the order on the pad before they leave the buffet car to avoid having to carry out mental arithmetic while balancing a tray. New for buffet stewards for 2015 are aprons with two pockets in them which are very handy for carrying change. Bank notes often get stowed in a shirt pocket - but need to be remembered when cashing up.

The Welsh Highland Railway operates a different system. Hot food orders and the drink orders in first class are taken initially, in a similar manner to the FR service. Once these orders are taken, the stewards will commence a trolley service in the third class part of the train. The trolley means that the carrying of trays along the greater length of a WHR train is avoided.

Working together as a team is essential to ensure everyone is served promptly and yet passengers are not asked repeatedly for orders. The F&WHR places great emphasis on customer service and it is the manner in which the stewards interact with the passengers which is the key to doing the job well. The passengers are usually feeling relaxed and are a delight to serve. Tips are quite common and are generally pooled and shared among the buffet crew.

If the train is not too crowded by the time the train is arriving at Tan y Bwlch on the FR or Rhyd Ddu on the WHR, all the passengers may have been served. One buffet steward takes the loco crew's drinks to them and usually puts them on the cab floor of a double engine on the fireman's side: they are busy filling the engine with water.

After this, a second service may be offered if the demand warrants it, or on hot days a tray of ice cream is offered instead.

Rubbish is collected on every trip and on up trains generally starts at the penultimate stop (or at Waunfawr for Caernarfon bound trains). Ideally, two stewards with a bin bag each walk up to the far end of the train while it is stopped, board and then work their way to the other end collecting all the rubbish (disposable cups, wrappers, empty bottles etc.) sorting it into one bag for recycling and one for rubbish. Once back at Porthmadog or Dinas these are transferred to the large bins.

Depending on the turnaround time at Blaenau there is a chance to relax and perhaps have a quick packed lunch if it is that time of day.

On the return trip, the process begins all over again. An added complication of the WHR operation is that the peak summer timetable results in a change of trains at Rhyd Ddu (Currently this change is undertaken on the last crossing of the day) to ensure the crews return to their starting point at the end of the day.

The stock re-order sheet needs completing at the end of the trip to ensure the materials get loaded on board for the next trip. If it is the buffet crew's last trip of the day, then the cash needs to be counted and entered on the sheet for delivery to the cashier at Porthmadog or Caernarfon. Final jobs are to clean the tables and brush and mop the floor of the buffet car. Two round trips on the FR are the norm for an FR buffet crew or one and a half for the WHR. 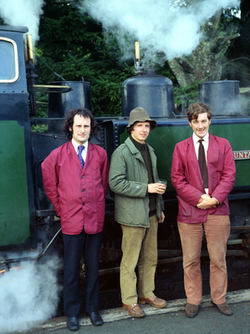 A Stirling and another buffet steward dressed in the unglamorous "shiny red" jackets which were uniform in July 1972. Photo: A Stirling via iBase Festiniog

Buffet stewards are required to wear black or brown leather shoes, charcoal grey or navy trousers or skirt and a white shirt. The FR provides a tie and navy blue waistcoat (on loan for the volunteer's stay) and a name badge which the volunteer can keep - but of course the hope is that they will return to wear it again.