For more information on the background to this topic see COVID-19 pandemic at Wikipedia. 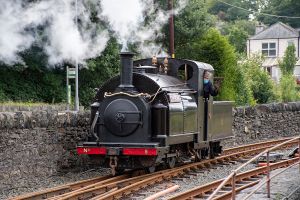 Welsh Pony during its running in after overhaul, 11 July 2020. The driver wears a facemask due to Covid-19 restrictions.

The Covid-19 Pandemic of 2020 and government measures to combat it had a large impact on the Ffestiniog and Welsh Highland Railways. In March, the trains had just begun operating from Porthmadog to Hafod y Llyn (WHR) on the Welsh Highland Railway but these were cancelled at short notice later in the month after the government brought in rules stating that people must stay at home. It quickly became clear that F&WHR services would not be able to operate for a considerable time.

Staff were put on furlough under the Government Job Retention Scheme under which 80% of their pay is provided by the UK government. Seasonal staff who were intended to be employed for 2020 lost that opportunity. Worksites, such as outdoor engineering projects which were underway, had to be made safe. The building of the new portal for the south end of Moelwyn Tunnel had fortunately just been completed.

The F&WHR Trust, FR Co., FR Society and WHR Society made a joint appeal for financial support as it was clear the railways would suffer a large drop in revenue. The response of supporters was good. £580,000 was raised by the appeal of which the FR Society quickly raised £50,000.[1]

The F&WHR came under the Welsh Assembly Government Covid-19 rules and these differed in some significant ways from those in England. For example, for many weeks travelling more than 5 miles was not allowed in Wales after unlimited distance was permitted in England. This prevented visits to Wales. During the early weeks of the lockdown virtually all volunteer activity ceased. The volunteer hostels were closed.

As the restrictions eased, some volunteer work was able to resume; in particular, work continued on the overhauls of locomotives Welsh Pony and 130. The first steaming of Welsh Pony was broadcast live on 27th June with many supporters watching via the internet.

On 23rd July it was announced that Minffordd Hostel would reopen on 25th July 2020 with only one household booked into a module. If the Welsh Government proceed with their plans to allow accommodation with shared facilities to open on 27th July it would allow the hostel to move to phase 2 where just one household is booked into a room but share a module. There are many new rules for avoiding the spread of Covid-19 and a health questionnaire must be completed in order to book accommodation.

No trains had originally been timetabled for the winter/early spring of 2020. The scheduled start of the season was cancelled; but eventually, a new COVID-safe Ffestiniog Railway public passenger service was announced to begin on 20th July. On Saturday 18th July members were offered free travel as a full rehearsal. Trains were formed of mainly compartment carriages and 4-wheelers and all tickets had to be pre-booked online. Future dates were only released for booking for a limited period of between about two weeks or a month to avoid complications if future operations became impossible as the Covid-19 conditions and government responses to them developed. One compartment on each train could be booked free-of-charge by members of the FRS and the WHRS. To enable social distancing, plywood partitions were fitted between adjacent compartments where there was no barrier above the seat backrests. On the first day the trains were hauled by Welsh Pony (still un-named), Upnor Castle and Blanche. Also in use were Linda and Prince. The service operated only as far as Tan y Bwlch with trains passing at Minffordd and Tan y Bwlch. Up to six trains were operated daily (dependent on demand), with only round trips out and back from Porthmadog. Platforms were closed to the public and there was a pedestrian one-way system around Harbour Station for passengers with tickets. A takeaway service was available at both Spooner's and Tanybwlch Café, to either eat at the station or onboard the train. Latterly, Spooners reopened for eat-in dining from Monday 3rd August 2020, both during the day and during the evening. FR Superbarns 103 - 120 - 108 were stabled on platform 2 to provide additional indoor socially-distanced dining space.

Train formations planned for the COVID-19 services were:

In practice, there was some variation in the sets for the first few days of the service due to carriage availability; later, when demand was high, 10 was added; during warmer weather, 1 - 12 - 37 - 38 - 39 were added.

Whilst there were no regular services north of Tanybwlch, works trains continued to operate as far as Tanygrisiau, and a Ffestiniog Railway Society members' special ran in early-September to Tanygrisiau.

In March, the WHR had just begun operating from Porthmadog to Hafod y Llyn (WHR) but these were cancelled at short notice later in the month after the government brought in rules stating people that must stay at home.

Initially, there was no service on the WHR once services on the FR resumed in July 2020. However, in mid-August 2020, it was announced that services on the WHR would resume from 18th August 2020. Formed of 12-car sets of the usual corridor saloon carriages with alternate seating bays blocked out of use, these services ran between Caernarfon and Beddgelert. The section from Porthmadog to Beddgelert remained closed. Trains were formed as follows:

Initially, the one train per day departed from Caernarfon at 11:00 arriving back in Caernarfon at approximately 16:00, including an hour and a half lunch break at Beddgelert. Services were strictly online pre-booking only, with access to platforms being restricted to ticket-holders only. Caffi de Winton at Caernarfon was open to eat in for both passengers and the general public, and also provided a takeaway service for passengers. As the usual onboard buffet service was not provided, food hampers could be prebooked online. These included a sandwich, salad, pork pies or potato salad, snacks and sweet treats, and drinks.

Two members' specials formed of Welsh Pony hauling vintage carriage stock ran on Saturday 12th September 2020 between Porthmadog and Beddgelert, which operated in addition to the main service train from Caernarfon. This was in lieu of Superpower which was scheduled to take place that weekend. Dinas was open for viewing with NGG16 130 and NG15 134 both on display.

It was announced on 2nd September that F&WHR had received a £250,000 grant from the National Lottery Heritage Fund's Heritage Emergency Fund which was developed in response to the Covid-19 situation. It is for use to maintain the FR's heritage buildings at Boston Lodge.

A notice to paid staff and supporters was issued on 15th September after consultations with staff about redundancies, likely to be more than 20, were commenced. The reduced train service operated in 2020 might bring in £1 million compared with normal £6 million revenue per year. The furlough scheme ending at the close of October and the normal autumn pause in services provides a natural break. Business planning had centred on two of the more plausible possible assumptions for 2021. One is an optimistic one - normal train services and 80% of normal revenue. This could break even. The less optimistic assumption is normal services and 60% of revenue. This would result in losses and in consequence in those market/covid-19 conditions cuts to services would be required. The FR Co. Board has agreed to plan on the basis of the more optimistic scenario. It was reported in January 2021 that 32 staff had been made redundant.[2]

On 19th October the Welsh "Firebreak" Lockdown was announced by the First Minister Mark Drakeford. It began at 18:00 on Friday 23rd October. The 11:00am service to Beddgelert on Wednesday 21st October was the last train on the WHR and the 14:20 service to Tan y Bwlch on Thursday 22nd October was the last train on the FR. Everything on the commercial side of the railways except the on line shop was closed until Monday 9th November at the earliest. No comment was possible on what would happen at the culmination of the "Firebreak" Lockdown.

On 9th November it was announced that train services and catering outlets would not open at the end of the Welsh Firebreak Lockdown. By then England had started its second lockdown on 5th November for a planned four weeks. Only the shop at Porthmadog and the on-line shop reopened. Subsequently there were lockdowns announced in Wales and England that meant no services operated and all but local volunteering were impossible throughout the 2020/21 winter.

On 18th March 2021 a number of catering job opportunities at Spooner's, Caernarfon and Tan y Bwlch were advertised on the F&WHR web site and were evidence that plans for reopening were imminent. By then about 50% of the adult population had received at least one vaccination for Covid 19 and some forward plans for removing Covid restrictions in England and Wales had been announced by their respective governments. The start dates in the job advertisements were mid April or mid May.

On 26th March plans for the start of the 2021 season operating from 1st May to 23rd July were announced in Inside Motion. Bookings opened from 10 am on Monday 29th March for four services.[3]

Porthmadog - Tan-y-Bwlch with a one hour stopover. There will be from one to six trains per day. Formed of heritage compartment stock. The name of the service is Woodland Wanderer.

Porthmadog - Barn Cutting (just beyond Rhoslyn Bridge at Dduallt) with a heritage diesel attached to the rear of the train from Tan y Bwlch. Stopover at Tan-y-Bwlch. Formed of heritage compartment stock. There will be up to five trains per day. The name of the service is Mountain Prince.

Caernarfon - Beddgelert With hampers and a stopover. Formed of modern WHR corridor carriages with perspex partitions. There will be up to four trains per week (one per day). The name of the service is Gelert Explorer.

Porthmadog - Beddgelert To start later in the year. Formed of modern FR corridor carriages with perspex partitions. The name of the service is Glaslyn Venturer. Two trains per day.

Caernarfon - Porthmadog To start late-Summer once restrictions ease. Formed of modern WHR corridor carriages with perspex partitions. The name of the service is Snowdonia Star/Seren Eryri.

Porthmadog - Caernarfon To start late-Summer once restrictions ease. Formed of modern WHR corridor carriages with perspex partitions. The name of the service is Castle Star/Seren Castell.

Of note was the decision to turn a Pullman observation car (Carriage 150 and Carriage 2100) for each of the sets operating on the WHR in order to provide a Pullman carriage on each end of each WHR service.

It was subsequently announced that the "Woodland Wanderer" would begin operating a little earlier from 27th April. "Mountain Prince" ran daily in the week before May bank holiday but for the holiday week the service reverted to "Woodland Wanderer" with its extra potential daily departure. In following weeks including July the "Mountain Prince" was due to run again. The "Glaslyn Venturer" first ran on Sunday 30th May and was advertised twice daily until 4th May and then every Tuesday, Wednesday and Thursday up to 22nd July.