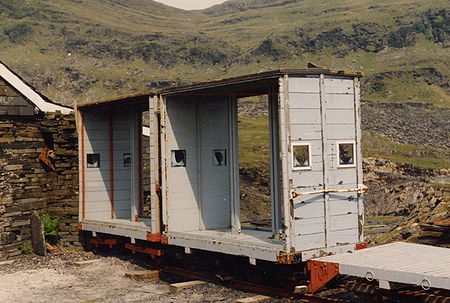 Bwlch-y-Slaters Quarry, located near the top of Manod Bach at SH732455, was one of the furthest quarries connected to the Ffestiniog Railway by the Rhiwbach Tramway. It has previously also been known as Bwlch Manod and New Manod Quarry (which is not the same as the Old Manod Quarry at SH725452).

Alfred McAlpine ran the quarry until late 2007, and it is reached by road from Llan Ffestiniog, via Cwm Teigl. This road was built in 1920 after the closure of the Rhiwbach Tramway. McAlpine have rather confusingly renamed the quarry as Cwt-y-Bugail, the name of a former quarry in the same area which closed in the 1960s (and which was also served by the Rhiwbach Tramway).

Its role as wartime storage for the national Art treasures is covered here.