Map of the Rhiwbach Tramway

The Rhiwbach Tramway was a narrow gauge railway connecting the remote slate quarries to the east of Blaenau Ffestiniog with the Festiniog Railway. Built to the same gauge as the FR and completed in March 1863, it ran from the FR's Duffws station, three miles east to to Rhiwbach Quarry, serving the Cwt-y-Bugail, and Blaen y Cwm quarries on the way. Just before Rhiwbach itself was reached, a branch led to Bwlch y Slaters (Manod) quarry, now operated by Rigcycle and known as Cwt y Bugail, the original quarry of that name having closed in the early 1960s.

The line was actually built by the FR but paid for by the Festiniog Slate Company. It was designed by Charles Easton Spooner, then Secretary and Engineer to the Festiniog Railway Company.

The quarries connected to the tramway had no practical road access as they lay at an altitude of around 1560' above sea level in a remote moorland.

The majority of the tramway was closed in 1961 and lifted in 1964. However, a short section remained in use until 1976 and some sleepers and a few lengths of rail are still in place. 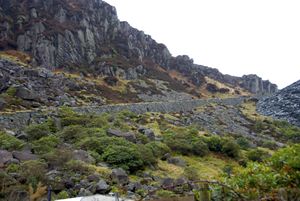 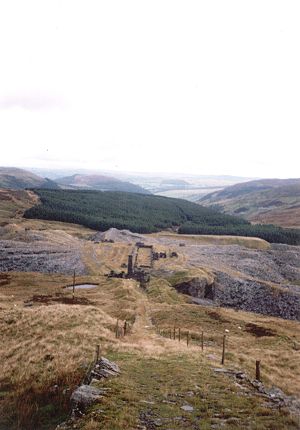 The first plans to build the Rhiwbach Tramway were drawn up in 1853. These can be seen at Caernarfon Record Office[1]. The main difference from the railway actually built was that it had several (4) inclines, both up and down, along its route and would have been difficult and expensive to operate. The line actually built was near level between inclines at either end. The earlier scheme was promoted by solicitor Thomas Spooner, son of James and brother of Charles Easton. It would have been owned by a separate company, the Festiniog & Machno Railway.

Construction of the 3 mile tramway began in 1861 and it was opened throughout in March 1863. It was built by Owen Gethin Jones, a contractor from Penmachno, to Charles Easton Spooner's design, and cost £14,000. In all it comprised four inclines, the three at the Blaenau end being self-acting. The incline at the Rhiwbach end was unusual as it was used to raise loaded waggons from the quarry's mill level to that of the tramway. As this worked against gravity the incline was steam-powered.

At the Blaenau end of the tramway three new inclines were built, called Rhiwbach Tramway inclines 1, 2 and 3 (numbered from Duffws, upwards). Incline measurements prepared in 1877 record these as Dolgarregddu Incline (No.1), Votty Incline (No.2) and Maenofferen Incline (No.3), but colloquially the lowest incline was known as the Bowydd incline after the quarry which also used it (and later owned it, after closure of the Tramway). Incline 1 in fact supplanted Bowydd Quarry's previous 1854 incline, hence the transfer of name, and should not to be confused with the Diffwys direct incline, also completed in 1863, and joining the FR at Duffws. The Maenofferen quarry, at the top of incline 2, also used the inclines down to the FR.

Incline 3 reached to the level of the main Tramway. The tramway then ran eastwards, on an approximately level course, towards Cwt y Bugail Quarry. From there the line turned south to the head of the incline down from the plateau to the Rhiwbach quarry which lay below, in the Machno valley.

At least a year before the tramway was opened throughout, inclines 1 and 2 were being used by the aforementioned quarries.

The Tramway was, in essence, a private enterprise, and "wayleave royalties", based on tonnage carried, were paid to Lord Newborough by the companies that used it. At the turn of the 20th century these companies comprised - 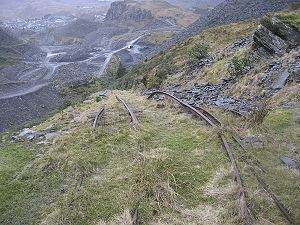 The head of No. 2 incline looking down to Maenofferen quarry in February 2007, showing much of the track still in place.

The tramway was intended to carry slate to Duffws for onward transportation by the Festiniog Railway. It never ran a regular passenger service but workmens' trains ran for some years, at least as far as Cwt y Bugail. The tramway, 1630' above sea level at its highest point, was designed for gravity working from Rhiwbach (utilising cuttings, tunnels, and a bridge), with horses returning the empty waggons, but there is some doubt as to whether or not this was successful as some of the gradients are quite shallow. Steam locomotives were never used but small petrol driven vehicles were introduced some time in the 1920s.

In 1928 the Maenofferen Quarry Co. had taken over the Tramway and continued to use Inclines 1 and 2 until 1962, and thereafter just Incline 2 until as recently as 1976. It was the last working self-acting incline in the industry. Final closure of this section came about when a new quarry road was built to connect the upper levels of Llechwedd with the mills at Maenofferen, following acquisition of the latter company by the former.

The tramway was built to a high standard and can still be easily traced. Many sleepers and some lengths of rail are still in place.

The locomotives known to have worked the Rhiwbach Tramway were Ruston & Hornsby 223687, a 4wD diesel locomotive built in 1944. It was purchased before 1949 by the Cwt-y-Bugail quarry and used on the tramway from 1953 to 1961. It was scrapped at Cwt-y-Bugail in 1974-77[2], and a locomotive made from a skip chassis and an Austin car, this locomotive currently resides in a decrepit state in the bottom yard at the Apedale valley light railway.

Further information, and extensive pictures, can be found on David Sallery's Penmorfa site.