This was an early example of a Special Event held on 22nd May 1963 as a Festiniog Railway marketing exercise. 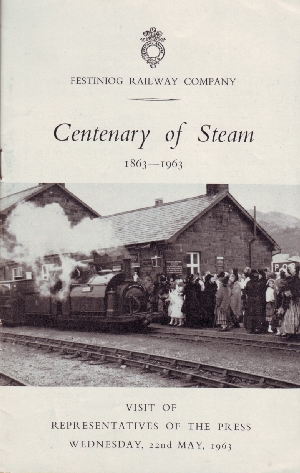 Centenary of Steam 1863-1963 - visit of Representatives of the Press, Wednesday 22 May 1963. The 8-page booklet commemorated the occasion and most likely was for sale although no price is shown. Printed by T.Stephenson & Sons Ltd. 135 x 210mm. It was distributed with the Festiniog Railway Magazine

The day was described in the leaflet above thus:

Representatives of the BBC, ITV, principal newspapers and leading periodicals travelled by chartered sleeper on the midnight train from Paddington to Chester where they were joined by the provincial press for a breakfast-car special from Chester to Portmadoc via Caernarvon and Afon Wen. The visit was planned to gain maximum advance publicity just before the Whitsuntide holiday and throughout the year. At Portmadoc BR, the party was met by motor coaches and conveyed across town to the Harbour Station where a crowd, dressed in period attire, was waiting to greet them. Princess, awaiting restoration, and Prince in full steam received their adulation and a horse trundled by with a couple of empty slate wagons symbolising both the transition from animal to steam traction and (unwittingly) the demise of the slate traffic! After a brief look at the museum, the party boarded the special train of four-wheelers (some cameramen travelling like Indians partly upon the roofs) for a trip to Minffordd where they detrained to watch a gravity train rumble through towards the sidings. Another special backed down, headed by Merddin Emrys with No. 14, No. 12 and No. 11 for their journey to Tan-y-bwlch where again they detrained, this time to await Prince who could be heard and seen whistling across the valley. On arrival, his 19th century volunteer extras detrained and entrained on request for the benefit of 20th century press photographers. In the competition for the best dressed mid-Victorian lady, first prize was won by Mrs Ann Parker of Portmadoc. The press returned to Minffordd for the Special to Chester. The extras were served refreshments at Tan-y-bwlch and likewise returned to Portmadoc so that the afternoon train service could operate normally.

A selection of photographs from that year, including those taken on the day, can be found here