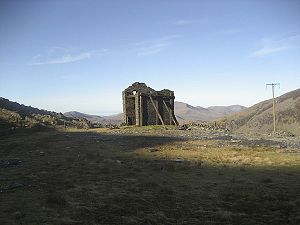 The incline winding house at the head of the exit incline

Croesor quarry lies high up in the Croesor valley, opposite Cnicht. It was connected to the wharves at Portmadoc by the Croesor Tramway. The quarry consisted of a substantial set of underground workings accessed through a single adit. Above ground the slate waste tips on the side of the valley were used to form a flat platform that the main cutting shed and slate stockyards sat on. These were connected to the single exit incline that dropped 500 feet to the head of the Croesor tramway below. 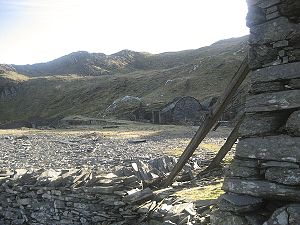 Looking across the quarry from the winding house. Behind the timber buttresses is the main adit and remains of the fan house. To the left is the site of the mill

The quarry was one of the first in the UK to be powered by hydro-electricity and to use electric locomotives. The quarry closed for slate production before the Second World War. In 1949, Cookes of Penrhyndeudraeth re-opened the quarry for use as an explosives store. This use continued until approximately 1975 when the explosives were removed as they posed a risk to the nearby Stwlan Dam. 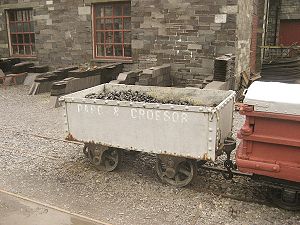