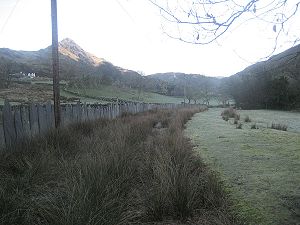 The trackbed of the Croesor Tramway just north of Croesor village 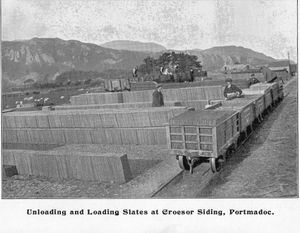 Unloading slates from Croesor Tramway wagons at Beddgelert Siding. The first narrow gauge wagon appears the size of a Festiniog Railway 2-ton slate wagon but has more bars in the end framing. The next ones are the solid-sided type favoured by Park & Croesor Quarry.

The Croesor Tramway (also known as the Croesor Railway) was a 2ft gauge tramway built to connect the slate quarries on the western flanks of Moelwyn Mawr with Porthmadog harbour and the Cambrian Railways. The tramway opened to traffic in 1864 (possibly partially opened earlier) and survived until the 1930s, by which time regular traffic over the line had ceased.

The lower part of the line became part of the Welsh Highland Railway in the 1920s, this part was reopened as part of the rebuilt WHR in 2011.

The tramway was built on wayleaves to the order of Hugh Beaver Roberts[1], a solicitor of Llanrwst. The exact date that work started on the tramway is not recorded, but in December 1862, the North Wales Chronicle reported:

"The Croesor Slate Quarry, which is situate on the south-west side of the celebrated Moelwyn Mountain, has been pretty fairly developed but the extreme difficulty of removing the slates to the Port for exportation has hitherto operated as a very serious drawback. In order to obviate this difficulty, it was resolved sometime ago to make a tramway to Portmadoc harbour, past Ynysfawr and along the flat ground of Traeth Mawr, so as to join the inner harbour by Ynystowyn and Mr. Spooner, the civil engineer, was directed to survey the line, and to supply the required plans and sections. This having been done to the satisfaction of the Company, it was resolved to carry out the design and we are glad to say that last week the undertaking was fairly commenced, at the end next the quarry"[2]

The "Mr. Spooner" referred to was Charles Easton Spooner.[3]

By April 1863 good progress was being made with the construction of the tramway trackbed and a large delivery of rails arrived ready for track laying.[4] It is likely that the tramway was operating later in 1863. By 1865, the tramway was in full operation and a takeover by the putative Beddgelert and Portmadoc Railway was already being proposed.[5] Beaver Roberts incorporated the Croesor & Portmadoc Railway Company by an Act of Parliament of 5 July 1865, with a registered office in Caernarfon. [6] This Act also provided powers to build a branch from Ynysfawr towards Beddgelert to serve the various mines that had opened around the village.[2] This proposed branch was not built, although the Welsh Highland Railway did eventually construct the route from Ynysfawr to Beddgelert.

The 1872 Parliamentary Act that set up the North Wales Narrow Gauge Railways, included proposed running rights over the Croesor and Portmadoc Railway. The proposed NWNGR line would have formed a junction with the Croesor Tramway near Garreg Hylldrem - near or at the point where the WHR would eventually meet the Croesor.[7]

The Croesor was connected to the Festiniog Railway at Porthmadog harbour, where it joined the fan of lines to the slate wharves. Likely from the earliest days, Festiniog Railway wagons traversed the Croesor. Certainly by 1873 the practice had been formalised, with the Festiniog charging the quarries along Cwm Croesor a tonnage fee for use of their wagons on the tramway.[8] The principal quarries in the valley provided their own wagons.

By the mid 1870s, the tramway company was in financial trouble and had to borrow money to keep operating. Matters became serious enough that the company's debenture holders appointed a receiver.[1] In 1879, under a new act of parliament, the owning company became the Portmadoc, Croesor and Beddgelert Tram Railway Company.[9] The new Croesor Railway Act authorised "extending the line to Llanfrothen" but again this extension was not built.[1] This was the first of a complex series of proposed and actual takeovers, leading up to the formation of the Welsh Highland Railway. The major shareholders of this new company were Hugh Beaver Roberts and James C. Russell a Director of the North Wales Narrow Gauge Railways.[1]

In 1882, another Bill was put before Parliament by the Porthmadog solicitors of Breese, Jones and Casson to again extend the Croesor Railway, and again this came to nothing.[1]

In 1898, the backers of the Beddgelert Light Railway sought to acquire the Croesor Railway as a first step towards their goal of a narrow gauge railway from Porthmadog to Beddgelert and on to Rhyd Ddu.[10]

In 1903 the Portmadoc, Croesor and Beddgelert Tram Railway Company was purchased by the North Wales Power and Traction Co. Ltd for £10,000 as part of their Portmadoc, Beddgelert and South Snowdon Railway (PBSSR) scheme.[11] Although the PBSSR scheme didn't come to anything the Croesor Tramway continued to operate.

The PBSSR works were later completed as the Welsh Highland Railway.

During the construction of the Welsh Highland Railway in 1922, the route between Porthmadog and Croesor Junction was taken up and re-laid in 45lb/yd rail. The section beyond, to the limit of the statutory railway near the A4085 crossing at Carreg Hylldrem, was not included in the contract with Sir Robert McAlpine & Sons and was not upgraded.[12] Eastwards from here, the original 1860s light T-rail remained until lifted by W.O. Williams of Harlech in 1948-9.

The connection with the new 1922-3 main line became known as Croesor Junction. Though there is no actual closure date for the rest of the route, most was out of use by the cessation of WHR operations in 1937. Unofficial usage apparently continued until the 1950s.

The rails remained in place until 1948-9 when the lower section was lifted by Will Scrap (as part of the dismantling of the WHR), the upper section succumbing during the 1950s or even 1960s. It is reported that some early reclamation of items was undertaken by Festiniog revivalists - three solid-sided wagons from Tre Saethan became ash waggons at Boston Lodge and were later passed one each to WHHR, Rheilffordd Llyn Tegid at Llanuwchllyn and the Welsh Slate Museum at Llanberis. Some of the T-rail was removed by WHR (1964) Co. and moved to Beddgelert Station, where it was never used. (During the 2006 rebuild, this was stolen)

The route of the tramway is still clear to see throughout most of its length and the final three miles at the south western end of the line are now restored as part of the Welsh Highland Railway project. The route can be seen on this Map link

The seaward end of the Croesor Tramway was at Portmadoc, home of the more famous FR Co., with whose lines it connected around the harbour, a triangle in the High Street remaining until 1927. The tramway ran in a north easterly direction into the Croesor valley, initially along the Creassy Embankment, for a distance of about 5 miles where it served by inclines a number of slate quarries along the southern side of the valley - Upper and Lower Parc, Fron Boeth (= warm breast[of a hill]), Croesor (=?Crossing) and Rhosydd (= Moors). Fron Boeth had a tunnel through Moelwyn to the sunny slope of the hill, hence the name. Croesor has an impressive incline - that at Rhosydd looks actively evil, with several slate waggons on the hillside where they fell off the incline. This incline was in use until 1952 to take fuel to the pumps at Rhosydd Quarry.

Other quarries served were Parc or Park, Pant Mawr and Croesor.

For a more illustrated description of the sections not being rebuilt in connection with the Welsh Highland, see the official WHR site here (external site). 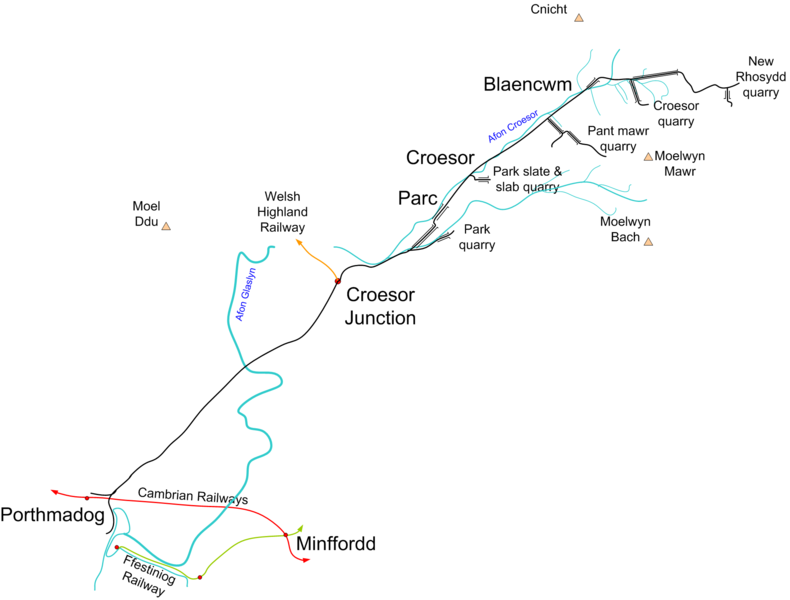 Map of the Croesor Tramway