Groby Junction is where the line from the Groby Granite Quarry used to join the Ffestiniog Railway. The location is still listed on the official FR route. 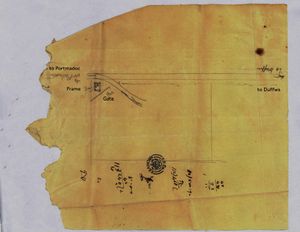 The Junction was first mooted during April 1908 when Mr. DG Davies applied to the the Directors of the FRCo for a siding to serve his quarry at Cefn Bychan, run by the The Groby Granite Co. Ltd. The Board agreed to the siding, and left the rates to be quoted for the traffic for Mr. Vaughan to calculate. The rates were not agreed until more than a year later: Directors Meeting 7th May 1909 Festiniog Granite Company's application for Rates for Macadam - A rate of 0/10d per ton agreed to under a guarantee of 20,000 tons in first two years. The 1909 costings for the junction seem to indicate the at the access to the large square landing was to be from the Portmadoc end. 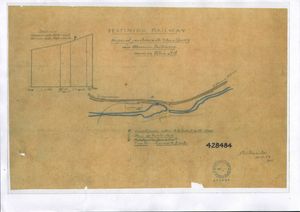 XD97/428484: Drawing signed by Alfred Crick, indicating that all the metals for the branch were new in 1913

Nothing seems to have been constructed on the ground, as the matter was considered again by the FRCo Board in 1913:

Junction with the Festiniog Granite Company's siding - Mr Vaughan reported that the points for this junction were in hand & that the Granite Company were making the line to connect.

Crick sent this plan to the Board of Trade on 27 November 1913, asking for approval to start using the connection as soon as possible as there was already a large quantity of stone awaiting collection. He was given approval by telegram after chasing it up on 9 February 1914. Colonel E. Druitt inspected the installation, reporting on 2 April that he had found everything satisfactory. The points were facing to down trains and worked by a two-lever ground frame locked by a key on the Blaenau No 3 – Tanygrisiau train staff.

The junction saw the steepest gradient at 1 in 25 and the smallest radius at 2 chains. Additional sidings were added in November 1913. The line fell into disuse and was lifted in the 1930s. The rails are still in the road crossing under the tarmac.

Groby Junction is just below Groesffordd footbridge and the 13 milepost. Will Jones (foreman platelayer) referred to it as Cefn Bychan Junction.

The Groby Granite Co. had a crushing plant at SH693453 and Cwm Bowydd Quarry is nearby at SH695454. The branch line from Groby Junction was reputedly the most difficult to work of any FR branch, descending from the junction at about 1 in 25, turning on a left-hand curve of about two chains (40m) radius, crossing the Glan y Pwll - Tan y Grisiau road (formerly B4414) on the level, then disappearing up a back street on an increasing gradient of up to about 1 in 20 (it looks steeper), turning sharp right on an even tighter radius curve ('Summit Corner' according to Boyd,) and instantly descending pell-mell at a gradient of at least 1 in 20 for some 400 to 500 yards (m) to the quarry, where a rising gradient made stopping rather easier. There are stories told of accidents on the line - see [1], p. 61 and more graphically pp. 75-6 (ex inf Tom Davies, who was generally reliable). Boyd reports that '20 to 30 m.p.h. was needed to rush the banks.' Prince at 30 m.p.h. even on the main line seems improbable and on a curvaceous and steeply uphill branch, rather more so. But that is the record. It may have been for this line that some FR slate waggons had wooden sides fitted within them, to carry gravel or ballast, four to a train according to Boyd. Boyd records (op.cit., p.61) that setts were carried in LNWR waggons, fourteen to a train. There seems a disparity in weight between these rakes. 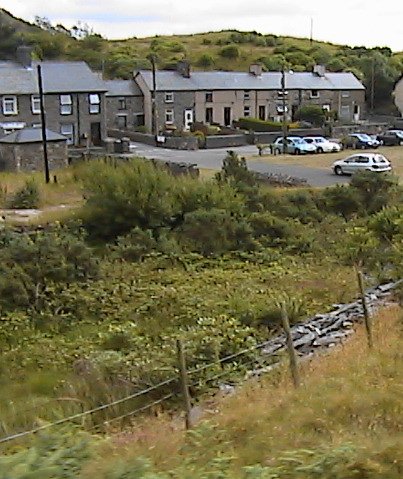 This picture shows the siding area and the line the track followed down to the road crossing, 2005