Prince (originally The Prince) is a steam locomotive built for the Festiniog Railway in 1863. One of the line's original locomotives, it continued in use (much rebuilt) until the mid 1930s.

When the FR closed in 1946 it was left in the works, part way through an overhaul. This allowed it to become the first steam locomotive rebuilt for use on the reopened railway in 1955. In the early years of the line's revival it was an important member of the locomotive fleet and was rebuilt to improve its usefulness. As train sizes have grown, it is now less used but is still a regular performer on special trains. Prince has also appeared at many events away from the railway.

Prince was named in honour of Albert Edward, Prince of Wales (later King Edward VII, 1840-1910) who had recently been married.[1] 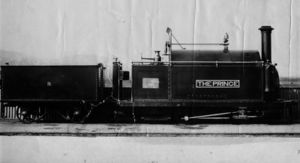 Bleasdale picture of The Prince in 1887

The Prince was (probably) the third of the first four FR locomotives built by George England & Co. at Hatcham Iron Works. It is now numbered 2, but there is doubt about the order of building and numbering of the first four England engines. As originally built it was side tank locomotive with an open footplate.

It was delivered to the FR in January 1864. These locomotives were worked hard: before Taliesin arrived, they were coming in for a 2 week period of maintenance every quarter. In this period they would replace brake blocks, brasses and cotter pins in the crank pins and replace some of the firebars. In 1878 The Prince's chimney was knocked off and that of Mountaineer was put on. By May 1881 Prince was in a poor state with the boiler pressure restricted to 110lb.

It had a major refit with a 'sham' cast iron tank fitted on top of the side tanks to increase the weight to ten tons and improve adhesion in wet weather, a new weather board, new sandboxes, new cylinders, and the boiler retubed. By the time of this picture it had gained a displacement lubricator as well. However, the boiler was wearing out and it was withdrawn on 16th May 1891. 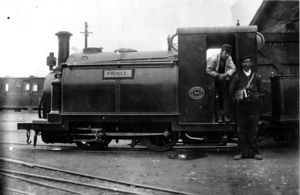 1892-1920: Second boiler and cab through to third and final rebuild under old Company[edit source]

In 1892 it was completely rebuilt with a full cab and saddle tank. At the same time the name The Prince was shortened to just Prince. In 1894 it broke the front axle and an old axle from Little Wonder was used as a replacement. The England engines continued to be the workhorses of the line and Prince was re-tubed in 1898 and 1901. Painting standards were high also and the record of a repaint in 1900 states that 5 coats of varnish were used! In 1912 the loco was fitted with Welsh Pony's smokebox. The loco continued in service until May 1915. In 1918 work was started on the chassis, and the new boiler was ordered in July 1918 (costing £595, from J. Adamson & Co.). The new boiler arrived in December 1919. The locomotive came back into traffic in September 1920. 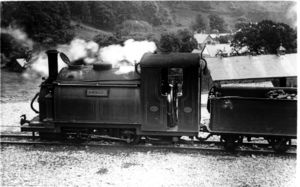 1920-1946: Involvement with the Welsh Highland, decline to rebuild that was not complete at closure[edit source]

The locomotive played a major role in the history of the Welsh Highland Railway], hauling the first train from Dinas to Portmadoc in 1923, and regularly performing on both lines in the 1920s and 1930s. It was overhauled between January & May 1929, and in 1932 it had an overhaul which repaired the smokebox, and it was re-tubed later in the year. However, the firebox began to have problems and Prince was withdrawn during 1936. Work was carried out to repair the firebox in 1937 but it was found to be beyond repair. The chassis received some maintenance in 1938 in anticipation of ordering a new boiler, but this was delayed due to lack of money. Work continued sporadically on the chassis until at least 1941. Finally a new boiler was ordered from Adamsons in September 1943 for £546, with a steel firebox and tubes. The actual cost had risen to £620 when delivered in July 1945. 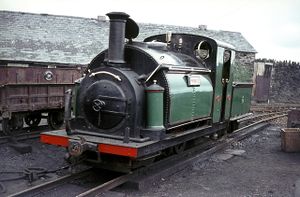 Prince at Boston Lodge in 1964. Note the fourth and last boiler, ordered by the old company, also straight outside frames added

The new owners in 1954 found the loco as left in 1946, in mid overhaul and with a new boiler. It was the obvious candidate for first loco to be restored. It first ran in preservation on August 2nd 1955 and was the mainstay of the service for the next 2 years until Taliesin was rebuilt. Prince ran during its first season with the tender still vacuum braked but the new owners decided against having braked tenders. Thus the brakes were removed from the tender in 1956. Prince was in service until the end of the 1960 season when it needed new cylinders.

In July 1962 Prince re-entered service with a different frame arrangement, to try and take the drawbar load through the frames and not the boiler. The stays in the firebox back head, below the fire door, had to be replaced at this time. Vulcan Foundry boiler-smiths did this work and used Monel Metal stays. It was thought, at the time that this was a good idea, it turned out not to be as they gave nothing but trouble.[2] The channel section external frame was an Allan Garraway solution to transfer the load away from the firebox/boiler, as was the original design. As part of this overhaul, trouble having been experienced with the solid brasses of the coupling rods, the rods from Lilla (which had adjustable brasses) were bought from Penrhyn and fitted to Prince. Prince's own rods were then sold to Lilla's new owner.[3]. Subsequently it was found one wheel was out of quarter and this was corrected (which allowed new rods of the original type to be fitted in its 1980 overhaul). This was the form in which it ran for its Centenary in 1963. 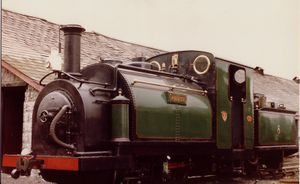 Prince at Boston Lodge in 1981 - As rebuilt with oil firing, superheating, new stepped frames and outside mounted ejector

Withdrawn in 1968, the locomotive was considerably rebuilt between 1974 and 1980 with the 1955 boiler superheated, oil firing fitted, and new outer frames added to carry the cab (raised by 4") and saddle tank. Much of the work at this rebuild was carried out by Geoff Hall and Jack Somers.

The locomotive's tender has on its left side four bushes, apparently indicating that the metal sheeting once carried a locomotive nameplate. Measurement of the bushes indicates that the tender side sheet possibly originated as part of one of Taliesin's original side tanks. When converted to oil-firing, Prince was provided with oil and water tanks in the tender.

In 1986 Prince was chosen to be the first FR engine to be put in a historic livery. The red livery was chosen because of the 1920s livery found during the 1980 rebuild. In 1987, Prince's frames started to break. Strengthening plates were put in, that winter and the loco celebrated its 125th anniversary in 1988 in good order again. 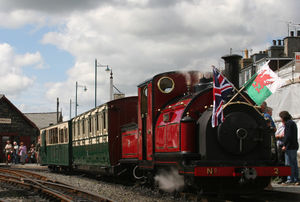 Prince at Porthmadog on the 50th anniversary of his first train under preservation 6th August 2005. This shows the cosmetic changes from the 1999 rebuild and the strengthening plates added in 1988 when the frames were found to be cracked.

In 1995 a brass handrail was restored to the smokebox and in winter 1995/6 the tender water tanks were removed and a new, less obtrusive, oil tank inserted. Prince had an overhaul between 1997 and 1999 during which the boiler was retubed, the chassis was given a thorough overhaul, and further cosmetic improvements were made. The loco re-emerged with the same red livery, but with improved lining. 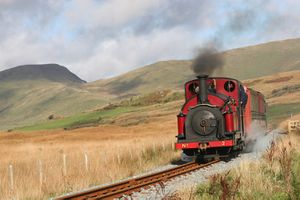 Prince taking the photocharter train over the WHR summit 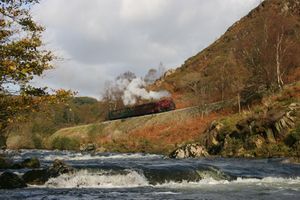 On 21 May 2009 Prince broke the banner at Beddgelert Station, to declare the route through the Aberglaslyn Pass open. Later that day he hauled the first fare paying passenger train through the pass. Prince operated until May 2010 when it was taken out of service for a boiler overhaul. Boston Lodge Works did not have space in their programme initially, so it was lent to the Severn Valley Railway's Engine House at Highley for exhibition. 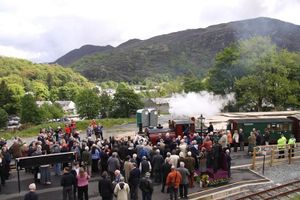 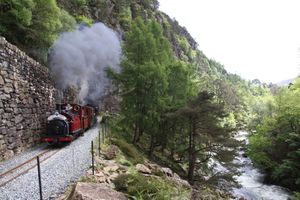 Prince in the Aberglaslyn Pass 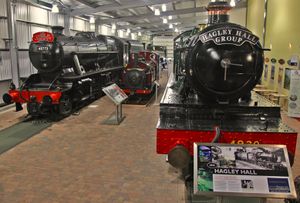 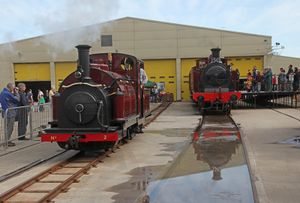 Prince at London Transport's Acton depot during the celebrations for the 150th anniversary of the underground. These coincided with the FR's own 150 years of steam celebrations.

Prince returned to Boston Lodge in 2012 and was overhauled in time for its 150th Birthday in 2013. This overhaul included reversion to coal firing. Prince's overhaul was completed by passing its official steam test on 8th April prior to visiting London to be in steam at Acton Lane Depot. Due to Prince being limited to 6 carriages it is rarely used on the regular passenger trains. It does however get used regularly over the winter months double heading on Santa and New year trains over the FR or single heading trains over the flat section of the WHR to Hafod y Llyn where the lack of gradient allows it to haul a longer train.

During 2020, due to Covid-19, Prince was used heavily on trains and due to this, the locomotive was pulled from service for a few weeks during September to allow the crosshead slippers to be re-whitemetalled.[4]

Prince has travelled far during the preservation era, visiting, amongst other places:

Prince was the inspiration for the character Duke in the Reverend W. Awdry's Railway Series books and its subsequent television adaptation. Duke first appeared in the 25th book of the Railway Series Duke the Lost Engine. Its four stories would later be adapted for television as part of the fourth season of Thomas and Friends. Additionally, Duke's model was recycled for Bertram in the fifth season, who shares Prince as his basis as a result.