Tanygrisiau (English: Under the Steps) is a request halt and token station on the Ffestiniog Railway. It lies at a height of 640ft (195m) above sea level and a distance of 12 miles 10 chains (19.51km) from Porthmadog.[route 1][wikipedia 1]

The original station opened in March 1866, the stone built station building and house was constructed later, in 1879. It would seem that in 1871 there was a small office where a porter lived. The station closed on 15th September 1939. The station was built with what can only be called slate rubble, for when the railway closed the building soon became a shell, and was removed some time after 1960 - by whom is unknown. All that remains is the old goods shed and part of the back wall of the main building. It is interesting to see that the new alignment of the track makes the shed look smaller than it really is.

An, admittedly poor, representation of the way the line has changed here

Tanygrisiau has seen three different railway alignments. The first course, dating from 1836, was in the horse tramway era. The second dates from 1852 and was a more suitable alignment for steam traction. This route was used until the preservation period when the third alignment was made to accommodate the new line built as part of the deviation. There is a picture in Boyd showing the second course just before it was obliterated by the construction of the reservoir. It clearly shows how the second course was somewhat higher than the first. It is not possible to see the 1852 route as it is under the water. The 1836 course is now the roadway in the Boyd picture. Whilst showing the line of the 1836 route, this picture has relevance in that there are at least two old pictures taken from the headland in the centre of the picture showing both the 1836 and 1852 courses.

After the opening of the Old Moelwyn Tunnel the railway had a continuous gradient down to Boston Lodge from 1842 until 1946, allowing loaded slate trains to run by gravity. Now there is a stiff climb from Tanygrisiau up to Power Station Summit.

The new station opened to passenger traffic on 24th June 1978 and was the passenger terminus until 25th May 1982 when services resumed through to Blaenau Ffestiniog. At one point, a refuge siding was laid, parallel to the platform, and furthest away from the lake. This was intended for works trains. Beyond that, a copse of trees was planted by the children of the local primary school c.1987 but alas they have not done well; this is still rather above the tree line.

A loop was installed when the new station opened in 1978 but it was lifted in May 1984. It was relaid in 1998. [1] The loop was, unusually for the FR, operated for left-hand running because the visibility for right-hand running is much limited for Down trains.

The signal box was largely built by Geoff Hall and is in the only place from which the Up and Down signals, together with any trains, can be seen. A complete set of semaphore signals to McKenzie & Holland design was lovingly made and erected as a volunteer project in the 1980s but in the 1990s the scheme was brutally cancelled incomplete by the General Manager of the day. The signal box was erected in 1993. One of the signals was sold to the Isle of Man Railway where it is now used as a starting signal at Douglas Station. Other components were eventually used in the resignalling of Harbour Station.[2]

The present-day loop signalling is in the style of that used on Rheilffordd Eryri, with damped trailable points and white lights for the point indicators. For this reason it is necessary for FR drivers to be able to distinguish between white and yellow lights.

It was intended to staff Tanygrisiau during the 2006 season to speed the process of crossing trains and to allow those trains which do not cross to pass through non-stop (providing there are no passengers wishing to use the station). The first occasion this occurred was on Monday 29 May 2006, but was not a permanent post. 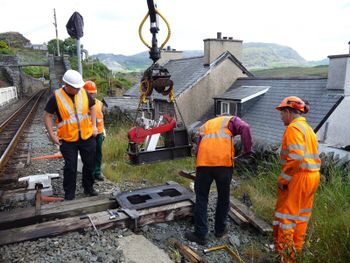 Some of the S&T crew, removing the weight mechanism

It had been decided to alter the arrangements of the loop to the standard right hand running for better sighting by operating staff. Considerable pre planning took place about a month prior to the June 2010 "Working Week" change, enabling it to be done quickly, and without too much disruption to normal traffic.

To accomplish the reversal of train running, it was needed to reverse the action of the weighted points at each end of the loop.

The S&T Train had been taken to Glan-y-Pwll, loaded with the equipment and tools required, and was ready for the S&T team to use when ready, as they had a number of jobs that week.

When taken to the site, it was locked into the "rock side" of the loop. (i.e. the left side going to Blaenau). The work was carried out on Tuesday, 29th June. The procedure involved, firstly removing the location cabinets and then disconnecting the weighted drive mechanism. Having unbolted the assembly, it was possible to turn it 180 degrees and replace. A new length of point rodding had then to be measured, cut and drilled before fitting. It was then out with the feeler gauges and spanners to reset the detection on the point blades. By early evening both points had been reversed and locked back into single line running position.

During the operation, for safety reasons, normal trains were stopped outside the loop, prior to entering it.

Passengers used to alight at this station for the Ffestiniog Power Station. (Sadly, security issues in recent years have signalled an end to the Power Station tours, and also to driving up to Stwlan Dam.) Opened on 10th August 1963 by H.M. The Queen, this is a pumped hydro-electric system which evens out peaks in national electricity demand. Water flows down large pipes from the upper reservoir, Llyn Stwlan, and drives the generators which reach full power in under a minute. The water is pumped back to the upper reservoir in off-peak periods. At the point where the railway runs on buried bridges over the penstocks (water pipes), guard rails are fixed outside the running rails in case the train comes off the rails and disables the power station....the sleepers on this stretch were surplus from the Glasgow Underground (4ft. gauge).

In 1920 they were Thomas Morris, Station Master and R.T. Owen, Porter.

There is a large area used for parking between the road and the station. It is free of charges.


This halt has a rough gravel car park, sufficient for about 15 cars, and a small slate waste ramp to the island platform. There is a small shelter but no other facilities.

Trains will not normally stop here, as this location is classed as a halt, and not a scheduled stop. Passengers are asked to notify the guard, as soon as possible, if they wish to alight at this location.
Intending passengers, from here, are requested to hold out your hand so the driver can see you. The driver will often give a short "toot" to acknowledge he has seen you.