The London Area Group was formed in October, 1955 although Mike Elvy had been taking working parties to the railway from the London area before the Group was set up officially. Group members have worked in all departments of the Railway over the years, but working parties concentrated mostly on the permanent way.

From the very beginning, using hired minibuses and members cars, volunteers from the London area made their way across pre-motorway Britain on a Friday night to slave away in Minffordd Yard or out on the track over the weekend before facing the long trek home on Sunday afternoon. These were monthly at first, but later increased to fortnightly.

Back in London, there were regular meetings and film shows of general railway interest and sales stands attended model railway shows, traction engine rallies, etc. to raise both funds and the railway's profile.

Homeworking has also been part of the LAG's contribution to the railway, starting in the early sixties when Ron Walker and Ron Fisher made some litter bins out of old oil drums in Ron W's South Harrow workshop. A larger and more recent example is the new down platform shelter at Minffordd. Another ongoing homework job is making drain covers for the Drains Project.

By the early 1970s hiring a minibus for the weekend had stopped and members were using and sharing their own cars. A big event in which LAG was on July 7th 1973 laying track in Barn Cutting and being visited by a whole train load of VIPs in one of those publicity events that the FR seem to do so well.

LAG working parties then generally moved to Blaenau, first to repair the old loco shed at Glan y pwll and then to lay track into the shed so that a diesel loco (probably Diana,) and a few wagons could be stored in it. Later LAG helped lift the track right down Dolrhedyn bridge and in the Station Fein site, eventually doing some relaying leading up to the reopening. Not long after that (1985) it was suggested that LAG might take over responsibility for trackside drains and that has been happening ever since although with decreasing LAG support under the direction of Rodney Thorp. It has taken all this time to get the drains into a decent state but they still need maintenance. Other jobs have been done by LAG working parties over these years including weeks in January doing some relaying.

In the 1970s regular meetings were held at the Abbey Community Centre, Westminster with some interesting speakers, Gerry Fiennes for one. The annual “Greg” (Ross Gregory) films shows were held there the Talyllyn & Welshpool members were invited. These were always well attended, so much so that they eventually moved out to allow more people to attend. The first was at the Botany Theatre and then the New Gallery in Regent Street probably 1975 or 1976. This, of course, eventually led on to “Steampipes” which settled at the Friends House, Euston Road until 2015. There were also some shows at the Conway Hall, Holborn Library (one cancelled after the ceiling collapsed), a theatre in Camden (one cancelled at short notice) and another in Aylesbury.

It was also 1976 when the Group celebrated 21 years of LAG working parties. “London 21” was the title and the headboard on the special train. There were multiple working parties on the Saturday; one of the wettest working days ever. The wettest job was working on a temporary repair to the Barlwyd bridge and the water rose considerably during the day. A celebration dinner was held at a pub in Pentrefelin on the Saturday night and a special train to Two Trees on Sunday. Some of us made a week of it from Wednesday to Wednesday and worked on clearing the spoil from digging the tunnel.

Ron Walker was group Chairman and he resigned the post about 1980 but stayed on the committee right to the end. Graham Westley took over from him for a few years and the left the committee altogether and Martin Cook took over. Whilst Graham was chairman there was worry about declining membership; it had fallen from around 300 in the early 70s to not much over 100 in little more than five years. The prediction was that membership was soon fall to the point where it was not worth continuing. The very strange thing is that having reached around 100 – 110 it has stayed at that level ever since and that is not the reason for closing now.

By about 1990 the Sales Stand activities were flagging somewhat and need someone to inject some new enthusiasm into it. It just happened that Martin Cook had taken early retirement and had some time to spare. The range of items for sale was increased and we looked carefully at the venues retaining only those where a good profit could be made. One new and highly successful one was the Model Engineer Exhibition at Olympia. After the exhibition had had one year there it was though that it would be great to have a 7¼“ battery powered railway running round the balcony. It just happened that Martin was on the organising committee and he said LAG would build and run the station if we could also run a sales stand without any further cost to us. This was agreed and it continued for several years until the exhibition moved elsewhere. When it finally ceased the track etc was sold and we got a share of the money. Eventually the sales stand had to stop about 2005 when Martin & Elizabeth felt that just moving the stock around was too much for them and there was no one younger & fitter to take over.

Over the years there were several celebrations. Following the “London 21” in 1976 there was a wait another 19 years for the 40th when another dinner was held at Pentrefelin and a special train. This was repeated for the 50th in 2005 but with the meal at The Royal Sportsman in Porthmadog. For both of these the Midland Group was invited as their formation was very close to ours. In 2011 there was one last ditch effort to increase membership of the group by organising a combined round trip of the FR and the newly opened WHR for which you had to be a LAG member. Membership was boosted for that year but did not continue. However, the trip was a financial success making around £2000. In actual fact the planning had started about two years earlier but had been delayed as the WHR took longer to finish than anyone thought. Two earlier provisional dates had been which were cancelled and it turned out that ours was the first combined trip for anyone other than sponsors of the WHR, a week or so before the much heralded “Snowdonian”. Our “Eryri Venturer” was a great day out so much so that we decided to repeat it for our 60th anniversary and swansong. Unfortunately it did not make a profit this time but was still enjoyed by everyone. 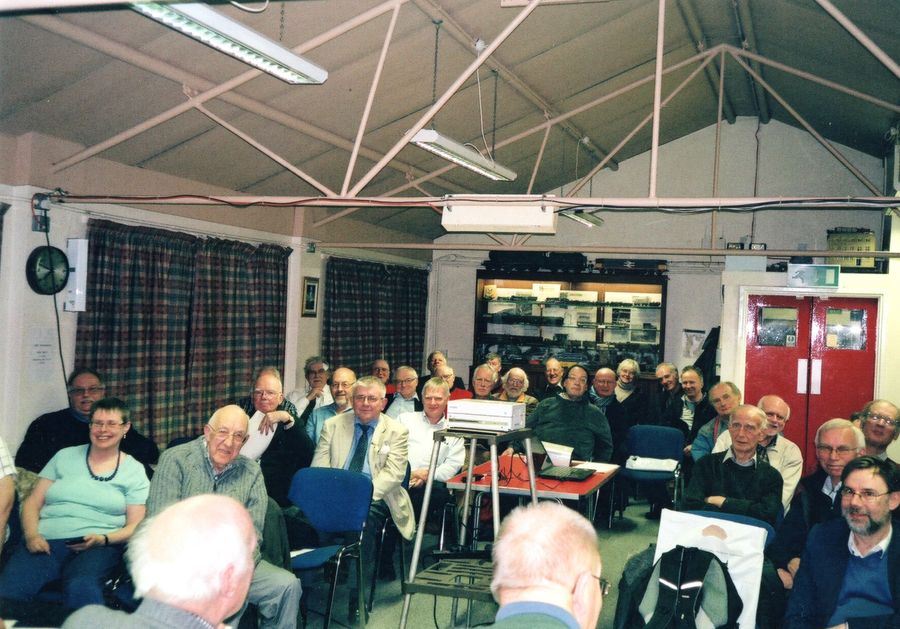 The 2015 LAG AGM passed a motion to close the group down a year later and so it was that the last meeting was held on 24th February 2016. The not inconsiderable funds left over will be distributed to various FR good causes. Over the 60 years approaching £150,000 (adjusted to present day values) has been raised and given to the FR. 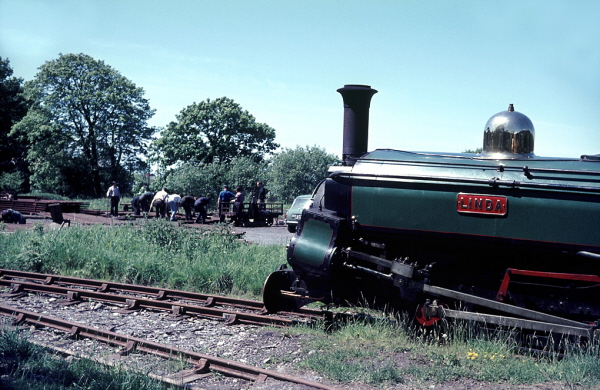 Linda reversing through Minffordd Yard to pick up some coal wagons from the exchange sidings with BR. The volunteer working party in the background is from the FR Society London Area Group. They are putting their collective backs into sorting out piles of old rails. 1966 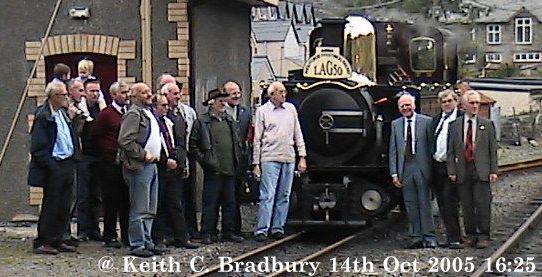