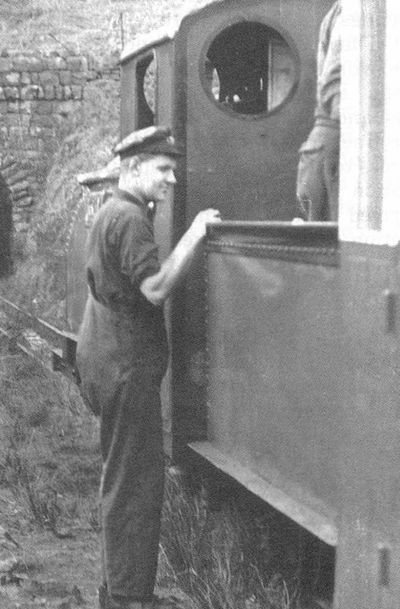 Mike Elvy was one of the very first volunteers to work on the Railway, taking a party from St Pauls School and helping to start on track clearance work in 1954 and becoming a fireman when the trains started running in 1955. [1] He had first visited the railway in 1953 while camping with his scout group near Talsarnau. [2]

His first volunteering on the FR was to clear the vegetation from Boston Lodge to Cemetery Cutting, Minffordd, at the end of August 1954. His party of school friends were camping near the Works and there were six of them working. Their most useful tool was an old wagon frame with wheels on which they stacked the hacked, pruned and sawed debris. They also had some hand tools. This was the first volunteering work done on the revived FR. They rolled the loaded trolley down to a point where they could stack the debris beside the track for later tipping well clear. Because of incessantly wet weather it was impossible to burn the rubbish.[3] Robert Evans the old General Manager came to talk to the boys and told them the trains would never run again, but he showed them around the Works and pointed to the reasons for his pessimism. Some short time later he was working for BR and learned from Allan Garraway that it was possible to travel by train from London on Friday night and get back on Monday morning in time for work having done a good stint of volunteering on the FR. So he used free "privilege" tickets. By the time he had a gap between work at BR and college in September 1955 he got to Portmadoc for a couple of weeks and the trains were running!

During the first few years of reopening he could be considered Allan Garraway's right-hand man, performing at both ends of the train and sometimes in the middle when there was no-one else to man the buffet car. On 12th April 1955 he had taken his models of Prince to the Model Railway Club Exhibition in Central Hall where the Festiniog Railway Society had a public launch with Vic Mitchell's fiancé in Welsh costume to attract the Press![4] He was a founder member of the London Area Group in October 1955 and was involved with the LAG sales stand during the 1960s. In 1964 he was Chairman of a LAG sub-committee formed to manage exhibition activities.

According to Dan Wilson, Mike had at one time been at risk of perpetuating Tom Davies's FR family connection by being engaged to Tom's daughter Jane. Mike used to scandalize Minffordd by blowing Prince's whistle at her in chapel on Sunday mornings, as he passed. The engagement was broken off but left Jane better informed about FR matters than might have been expected.[5] FR Magazine No. 7 in Winter 1959/60 carried a notice of the engagement.

When Mike married Lil they caused something of a stir in the London borough of Hounslow by driving from the church on his traction engine. The traction engine later had company in the shape of John Ransom's Alco before it became the FR's Mountaineer. They both resided in the grounds of the Osterley Sea Scouts with which Mike was associated.

Mike was responsible for developing the range of 009 models and scale drawings that the FR marketed in the early preservation period. Some are still available through FRHG Sales.

In his professional life Mike was a Civil Engineer on B.R. He became, at Allan Garraway's suggestion, Civil Engineering Consultant to the FR. [6] The job involved at least one inspection of the railway on foot each year, plus other inspections as required. While working as Area Engineer Pontypool-Craven Arms (based at Pontypool Road Station) a lot of damaged BR sleepers became available as a result of a derailment and he delivered them to the FR where useful sleepers could be salvaged. Other equipment which he obtained from BR included rail flange lubricators which could reduce the wear on rails and wheel flanges. These were fitted to the track before major bends such as Whistling Curve. In August 1965 Mike accompanied by Frank Hardy of the Chief Civil Engineer, BR Southern Region's office brought a Hallade Track Recording Machine to the FR and operated it in several different coaches to get a scientific assessment of the various types of suspension and bogies. [7] Mike organised a special DMU from Cardiff to Minffordd for a round trip to Dduallt and return on Saturday 29th May 1969.[8] In 1971 he was Permanent Way Area Assistant Engineer at Kings Cross.[9]

Eventually he left these shores in 1975 to further his career in Hong Kong and the Far East. His direct involvement with the F.R. also ceased. He died in 2003.

Mike had written up an account of his F.R. experiencies, which he called "Twenty Years in the 'Festering Bog'". This was published in the "Ffestiniog Railway Magazine" in four parts, commencing in the Winter 2003/2004 issue No 183.