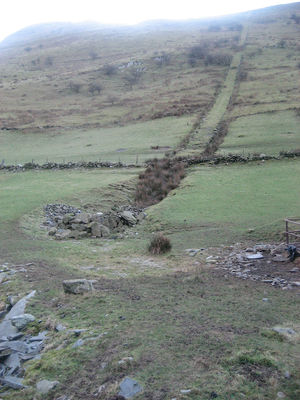 The lower end of the Pant Mawr incline, where it joins the Croesor Tramway

Pant Mawr quarry was a slate quarry in Cwm Croesor that began operating around 1850. Initially all output was taken by pack horse along Cwm Maesgwm to Penrhyndeudraeth for transhipment onto the Ffestiniog Railway. In 1863 the quarry was connected to the newly built Croesor Tramway by two long inclines. After this, all traffic was sent to Porthmadog via the Croesor Tramway.

The quarry was idled in 1879 and did not re-open until 1886, when it was amalgamated with Fron Boeth. It finally ceased production in or shortly after 1905.