The name is derived from rocks by the road, which when viewed from the north appear to form the profile of a face, specifically that of William Pitt the Younger (1759-1806); Prime Minister at the age of 23 - a sight to make surrounding nations stare / A nation trusted to a schoolboy's care. The stone may have been "improved" to make the likeness more so.

The rocks are known as Cerrig Colwyn in Welsh, a reference to the nearby Afon Colwyn. 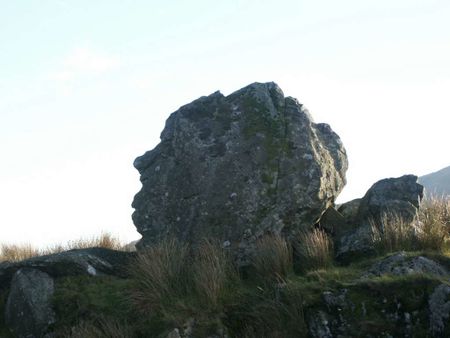 As viewed from the Caernarfon side, clearly showing the image of a head. 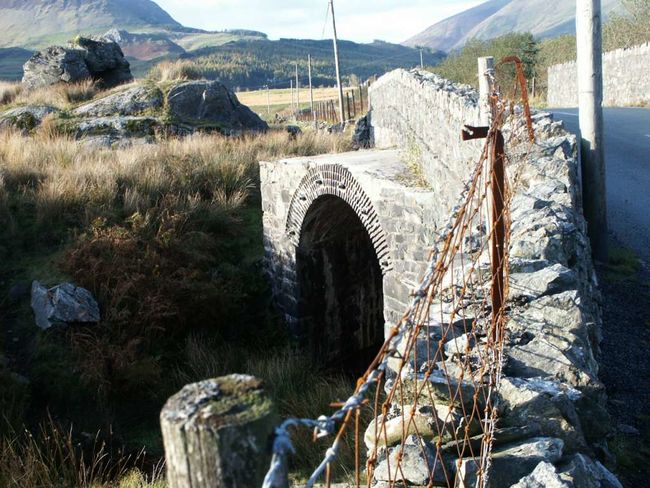 And from the Beddgelert side, where there is no real likeness.

This section of formation and the overbridge were built as part of the PB&SSR works in around 1906. The bridge has greater headroom than the NWNGR bridges to the north (possibly to allow for future electrification) and so the floor did not need lowering for the modern WHR.

A stone crusher was in operation here in the early 20th Century.

Later, for a short time there was a WHR halt in existence here, just before the bridge on the other side of the road. Boyd makes a reference to it, but no further details. A possible entrance gate still existed in 2006. Examples of old WHR tickets with "Pitt's Head" as a destination exist.[1]

After the track was lifted in 1941, a small amount of rail was left on the gradient south from Pont Cae Gors. The War Department used this for releasing slate wagons (which then moved under gravity) and then using them as target practice by anti-tank guns based at the forestry car park.

The FR recovered several lengths of flat bottom rail from the cutting on the south side of the bridge in mid November 1958 in an operation ever since known as "Garraway's Bath" due the rail being under water.

The discovery of Croesor-pattern T-bulb iron rail in the cutting during clearance in 2005 has yet to be explained.

In the summer of 2000, prior to reconstruction work commencing, Gwynedd council undertook remedial work on the road bridge. 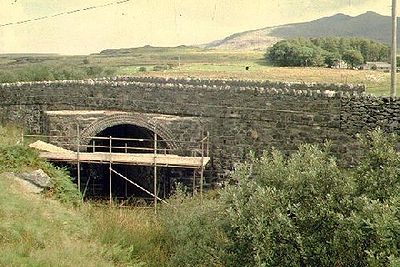 This northerly view shows work in progress by GCC repointing and waterproofing OB123, the A4085 road bridge at Pitt's Head during the summer of 2000. Snowdon is in the background 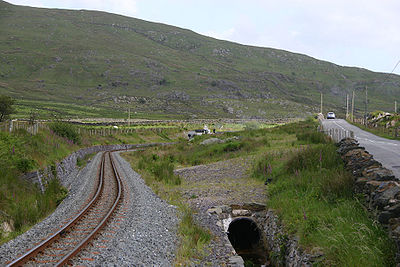 Location of Pitt's Head Halt. No trace today. The "head" is on the right out of shot, just over the road