The Dismantling of the Welsh Highland Railway

The Welsh Highland Railway officially closed on 31st May, 1937, and the line lay in disuse, although the Ffestiniog Railway still received (until they gave up the lease) a small rental income from buildings, some of which were being used by the War Department. The WHR went into liquidation in 1944 (not liquidated for 60 years - another record!) and the various liquidators and receivers took little note of what went on thereafter.

On 19th June 1937, a recovery train hauled by Russell left Dinas to collect abandoned WHR wagons, and to round up any Festiniog wagons which were still on the line, and to return them to Portmadoc. Having collected the FR wagons, and left them in sidings behind the harbour, Russell then went to Boston Lodge to retrieve the Baldwin, which had been there for repair. Russell propelled the Baldwin back to Harbour Station, and then collected any WHR wagons from the sidings, which were attached behind it. It then headed back to Dinas, stopping at Beddgelert to collect more wagons. However, the train had to stop at Hafod Ruffydd, Russell slipping badly on the overgrown and wet gradient. It returned to Beddgelert, leaving some wagons there, and propelled the Baldwin on to Dinas. Later the same week Russell returned to Beddgelert for the wagons left there, and it also picked up others left in sidings between there and Dinas.

Whilst some of the coaching stock was under cover in the carriage shed, a long train of mixed stock was left on the main line. Russell and the Baldwin were left in the engine shed, which by 1939 had a large hole in the roof. Some 40 wagons lay in the overgrown sidings to the north of the station in various stages of decay. And thus things were left.

Under the terms of the surrender of the lease, and as part payment of outstanding debts (some £186 owing for the supply of locomotives, coal and labour) the Festiniog retained Moel Tryfan (in pieces at Boston Lodge), Carriage 23, and 3 ex-WD bogie open wagons used for coal.

Eight coaches at Dinas were put up for auction. As described [1], they were -

The decision to dismantle the line[edit source]

Although the Ffestiniog Railway lease did not officially end until 31st December 1942, and arrangements with the L.M.S. at Dinas were due to end on 30th June 1943, in March 1941 the Ministry of Transport stated that the railway had a history of losses, and that there was no prospect of it re-opening. Consequently, the Ministry of Supply, faced with acute wartime shortages, requisitioned the materials for £1280, the money going to the Official Receiver. The track was removed under a Requisition Order issued on 13th March 1941 under Defence Regulations 1939, which authorised the British Iron and Steel Corporation (Scrap) Ltd. of London to removed articles specified in the order. These items were -

The initial dismantling of the line[edit source] 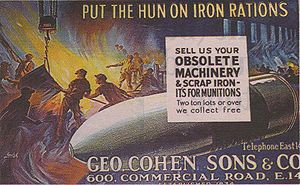 A wartime advert by George Cohen, Sons & Co. seeking scrap metal. It was this company which dismantled the line, but it is debatable what contribution the WHR made to the war effort, as at the end of the war most of the rail was still in Cohen's yard.

Between closure and 1941 some 14 scrap dealers expressed interest in the remains of the WHR. In July 1941 it was George Cohen, Sons & Co. Ltd who succeeded in purchasing the lot, and in August 1941 they arrived at Dinas with equipment including two or more 4w internal combustion locomotives, probably rebuilt ex-World War I 40hp "Simplex" locomotives marketed under the "Planet" name by FC Hibberd & Co Ltd.

At Dinas the dismantling team was faced with the scene described above, namely Russell, the Baldwin, 8 coaches, and a total of 104 wagons.

The track had remained in fairly good condition, though overgrown - especially in cuttings - and on August 11th, 1941 the demolition contractors started out from Dinas with a petrol tractor and observation coach, after first clearing the cutting of undergrowth. After breaking down almost straight away, they had to make a second attempt on the following day. It was necessary to stop to clear rails at all crossings, to avoid derailment, but they succeeded in reaching Tryfan Junction. Here they turned back due to the danger of overhanging branches smashing the coach windows. The third day saw a third attempt with the petrol tractor hauling a bogie flat wagon and a 4-wheeled wagon.

At Plas-y-Nant a Home Guard barricade had to be removed, as did the one by the Aberglaslyn tunnel, but the train reached the tunnel entrance at 5pm that afternoon. Prior to this, some tools had been left in the building at South Snowdon. It was only on the fourth day that the train reached Portmadoc New. This was the end of the line as the GWR crossing and the crossing box had been removed by the GWR as early as October 1938.

Demolition was undertaken in two halves, the line being severed initially at South Snowdon, from where two gangs worked either side of the cut towards Dinas and Portmadoc respectively. The northern gang reached Dinas in May 1942 - having also removed the Bryngwyn branch - and materials were stacked for shipment on the LMS line.

The southern gang reached Croesor Junction in June 1942, materials stacked on the Beddgelert Siding for further shipment. In total, some 1,200 tons of rail was recovered which was re-usable, and many of the sleepers could also be used again.

In June there was also an auction of rolling stock at Dinas (see above), and two months later, in August 1942, the Baldwin was cut up there.

Russell was sent to Wrexham for overhaul before transfer to the Hook Norton ironstone quarries.

All the bridges on the line were left intact, including the girder bridges.

Stone buildings - mostly on the original NWNGR section - were left by the northern gang, but any corrugated iron buildings were removed - with the exception of Portmadoc New (1923), which survived by virtue of being on the south side of the dismantled GWR crossing, but mainly because it was FR property and not part of the WHR. It later succumbed to arson in 1970.

The coaches were sold, complete with running gear, and a number were purchased by local people, to be later seen in the countryside having adopted varied uses. One, Ashbury summer coach 26, was retrieved for the Festiniog in 1959, and two later found their way back to the WHHR, namely the Gladstone observation coach and the former refreshment coach, both recovered in 1987. 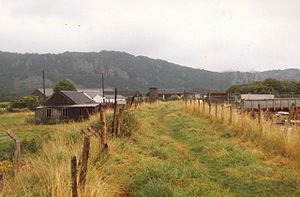 Portmadoc New (1923) survived both phases of dismantling, but was later badly damaged by fire.

The section of line between Portmadoc and Croesor Junction was not removed, as it was anticipated that the quarry would re-open after the war. A section between Hafod Ruffydd and Pitt's Head was also deliberately left, the gradient being utilised by the army for gun practice on moving targets.

Most of this remaining rail was subsequently lifted (from August 1948 to August 1949) by W.O. Williams of Harlech, who used an unidentified 20hp 4wPM Motor Rail "Simplex", No.14, obtained from a Scottish contractor. This was subsequently abandoned near the former standard gauge crossing at Porthmadog, and scrapped on site in 1955. Parts were recovered by FR staff to repair their 40hp Simplex Mary Ann (ex inf. AGWG). The railway section of Pont Croesor was dismantled during the 1948-9 work.

A small amount of rail was left in the cutting at Pitt's Head, to be recovered by the Festiniog Railway in November 1958 in an operation ever since known as "Garraway's Bath".

Much of the section of track south of the Cambrian Crossing, i.e. between Portmadoc Harbour Station and the GWR, was removed in May 1949, (that between the Snowdon Mill and the Glaslyn Foundry maybe in 1952?), whilst that south of the Glaslyn Foundry actually lasted into the preservation period. It is believed that the track on Britannia Bridge, outside Harbour Station) was lifted in Sept. 1958, and the final lift was a small section in Madoc St. at Easter 1960.[2]