Railway tracks consist of two parallel steel rails, which are laid upon sleepers (or cross ties) that are embedded in ballast to form the railway track.

The rails, if doublehead or bullhead type, are secured by wooden keys into cast-iron chairs which are fastened to the wooden sleepers with spikes (pre mid-1960s) or screws (see photo below). Flat-bottom rails are fastened to the sleepers with rail spikes or with screws and baseplates for wooden sleepers, or Pandrol or other patent clips for sleepers of all materials (including steel and concrete). Fishplates are used for joining rails. 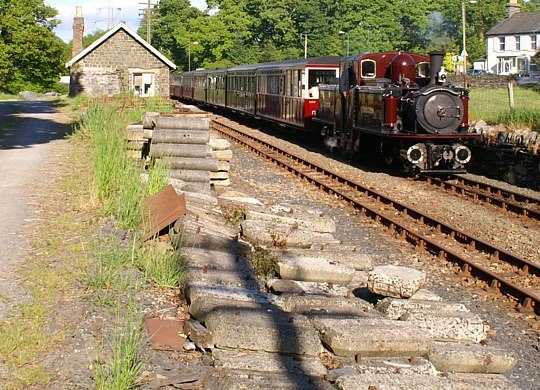 Sleepers spread the load from the rails over the ground, and also serve to hold the rails a fixed distance apart, called the gauge. Early FR track used stone block sleepers, separate blocks under each rail, which relied on the ballast to hold the rails to gauge. This was normal practice on horse-worked railways at this period but wooden cross-sleepers began to replace them in the 1840s, to provided resilience and to hold the gauge better. From the time of the revival until the purchase of new jarrah sleepers began in the 1970s, the FR used 2nd hand standard gauge sleepers cut in half. The cut ends were daubed with grease and the bolt holes of the standard gauge chairs were plugged with wood splinters - often from old wooden keys. A great many sleepers at the time of relaying to Dduallt in 1966-68 came from the old Great Central line where some recently laid sections of track was being taken up. More recently the FR has started to use plastic sleepers. These sleepers have the appearance of traditional wooden ones but are expected to have a much longer lifetime.

Railway tracks are normally laid on a bed of coarse stone chippings known as ballast, which combines resilience, some amount of flexibility, and good drainage. However, track can also be laid on or into concrete (slab track). Across bridges, track is often laid on sleepers across longitudinal timbers.

There are a number of types of rail, mostly of a uniform cross section.

FR Fishbelly rail on display at Minffordd, May 2013

The oldest type on the FR - traces found in Boston Lodge yard in the early days of restoration. An exception to the uniform shape in that the depth of rail bows between sleepers. Usually cast-iron used elsewhere, but according to Boyd the FR ones were wrought iron of 16 lb. per yard and 18 ft lengths.

18 lb. per yard parallel T-rail displaced fishbelly rail from about 1842. [1] FR T-rails were of increasingly heavyweights, with chairs replaced accordingly until double-headed rails were introduced. [2] According to Boyd this was in 1868. Heavier T-rail of 30 lb. per yard and then 42 lb. per yard was introduced in 1842 and 1846 respectively. These heavier T-rails were in 21 foot lengths. There was still T section rail in sidings in 1965 for the Volunteers' Manual published in that year says:

"Summer is also the time of year when sidings are relaid. In addition to resleepering, this often involves the replacement of old badly worn iron double-head or even 'T' section rail by steel double-head rail removed from the main line." 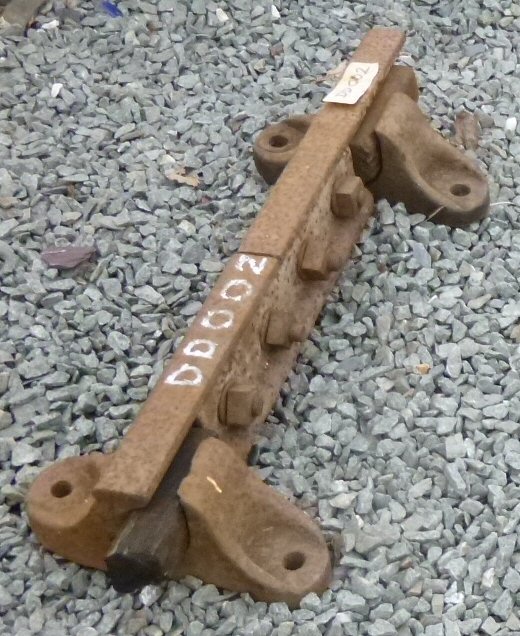 FR 46lb Doublehead rail on display at Minffordd, May 2013

A symmetrical section, 46lb wrought iron double head, which in theory could be reused by inversion when the upper head became too worn. However in practice the lower edge received permanent impressions from the chairs, so that when inverted the new top surface would not give smooth running. This type was introduced on the FR in 1868. The usual length was 24 feet for doublehead rail and bullhead rail (see below). Later the rail was 48.5 lb. per yard and then by 1896, 50 lb. per yard of steel rather than the earlier wrought iron.

Some of this type survived on the FR and it was intended to restore it to the running lines through Minffordd station as a historical feature, part of the Waggon Tracks project, but this was later abandoned. Double head rail was very commonly used on British standard gauge railways from about 1835 (the Grand Junction Railway) until around 1870 when bullhead rail began to be laid. [3] It became common practice on the standard gauge to follow the example of the South East Coast Railway from about 1842 for rails to be given an inward inclination of about 1 in 20 by suitably designed chairs but on the Festiniog and Cambrian the rails were vertical.[4]

FR 50lb Bullhead rail on display at Minffordd, May 2013

Introduced in 1878, (Boyd 1975) the head is much bigger than the foot, to maximise wear life. It replaced far less than half of the double head rail in the FR main line by the time the FR closed in 1946 (in fact no new bullhead rail had been purchased for many years before that). Most was in 24 foot lengths but there was a smaller quantity in 30 foot lengths. A crucial supply of second hand bullhead rail with its chairs was obtained from the Penrhyn Railway in the 1960s and referred to as Penrhyn Quarry Rail which was used in the reopening phase, primarily from Tan y Bwlch to Dduallt. Then in 1969 it was used to relay the double head rail on The Cob. The last bullhead was removed from the FR main line near Highgates Crossing, Penrhyn, in January 2017 so rails of this type were in use on the FR running line for 139 years.

Can be spiked down to wooden sleepers without chairs but is usually used with baseplates on wooden sleepers for recent relayings on the FR. Used on the re-instated WHR on steel sleepers with bolts or Pandrol spring clips. Flat bottom rail was standard on the pre-war WHR but only used before closure on the FR on the Dinas Branch. These early FR flatbottomed rails were sold to Cohens for scrap and lifted at about Christmastime, 1955. The flatbottom rail used to relay the FR since about 1970 comes in various lengths but is generally longer than the old 24 foot rails of FR chaired track. In 1971 75 lb/yard second hand F/B rail from the Rhymney and Barry Railways was laid on Gwyndy Bank and welded into approximately 84 foot lengths.[6] In 1972 1,900 track yards of second hand 75 lb/yard F/B rail from Tilbury power station were purchased.[7] The first delivery of new 60 lb/yard flat bottomed rail from Workington was in 1973 Mitchell and Garraway (2001)a Return to Blaenau 1970 - 82, Middleton Press, Midhurst, West Sussex, GU29 9AZ, UK page 15. (Mitchell et al 2001b) and shortly afterwards new rail was delivered direct to Glan y Pwll to relay the upper section of line. For an informative article about early use of flat bottomed second hand rail on the FR see Fred Howes's FRM article about Drayton Park Rail.[8] In recent years (written 2020) some flat bottomed rail has been fitted with inclined base plates so that rather than the rails being vertical they are inclined inwards towards the top. This means that initially the wear and shine on the rail heads is towards the outside of the rail head but with wear it moves to the centre. [9]

Used on Britannia Bridge and the other level crossings on the CTRL as it can be inset within the road surface and preserves the flangeway. It is laid on a concrete slab without separate sleepers.