Fred, was until his retirement in 2009, the Permanent Way Manager for the Ffestiniog and Welsh Highland Railways. He arrived on the railway in July 1964 having previously been a regular volunteer on London Area Group weekend working parties. He previously worked for an electronics company at Redhill, building control panels. This was interesting enough when it really meant building them from start to finish, but when the job became increasingly putting together sub-assemblies, his interest declined in proportion and he got the job on the FR.

His first introduction to the FR was a journey in a bug box - on the north side. He and school friends, on holiday in 1962 with Freedom of Wales tickets, decided to leave BR at Penrhyn and travel on to Portmadoc by the FR. Only they were not sure where to find the FR station in Penrhyn and had to obtain directions from a passer-by in the centre of the village, who recommended the nearby bus stop or BR station. Fred also subsequently came with LAG working parties from February 1963, culminating in a three-week visit to the FR in 1964 after which he joined the staff.[1] [2]

He had a spell of firing for the drivers of the day, but found his niche when he started on the track under the tuition of Will Jones. Will retired in 1968 and after Ron Lester departed in the mid 1970s Fred became in charge of the Permanent Way. Fred had joined the Permanent Way Institution as a way of improving his skills and encouraged the gang and volunteers to do so as well. There followed a programme of technical improvement not seen since the heyday of the Spooners. He introduced measured shovel packing as a way of retaining track quality. Short rail sections were welded into longer sections for key locations, screw fastenings replaced spikes and then, in turn were replaced by pandrol clips and baseplates. Jarrah sleepers replaced softwoods and more recently stone blowing replaced the measured shovel packing. It was Fred who laid out the line on old and new railway with transition curves and cant gradients suitable for 20mph trains which smooths the ride for passengers and minimises the wear from the trains. He can tell many tales from his past experience on the railway, and is renowned for his impersonation of a DMU vacuum brake! He is known for his organisation and planning abilities - his office is stacked with information past and present on track and people. For anyone interested in FR Permanent Way essential viewing is the Permanent Way Man DVD published in 2013 by Ff&WHR.[3]

He is currently Welsh Vice-President of the Permanent Way Institute

Fred has been a member of the Management Committee of the FR Heritage Group for more than 20 years. He volunteered because he was interested and because, in his own words, "I am responsible for 13 and a half miles of the most important FR Heritage, the trackbed and civil engineering!" After the FRHG AGM in October 2009 Fred was elected Chairman of the FRHG Management Committee. In 2015 he retired from this post.

For many years, Fred, as the FR's most senior departmental manager, has acted as deputy to successive General Managers. There are many people who claim that Fred is probably the best GM the railway never had! 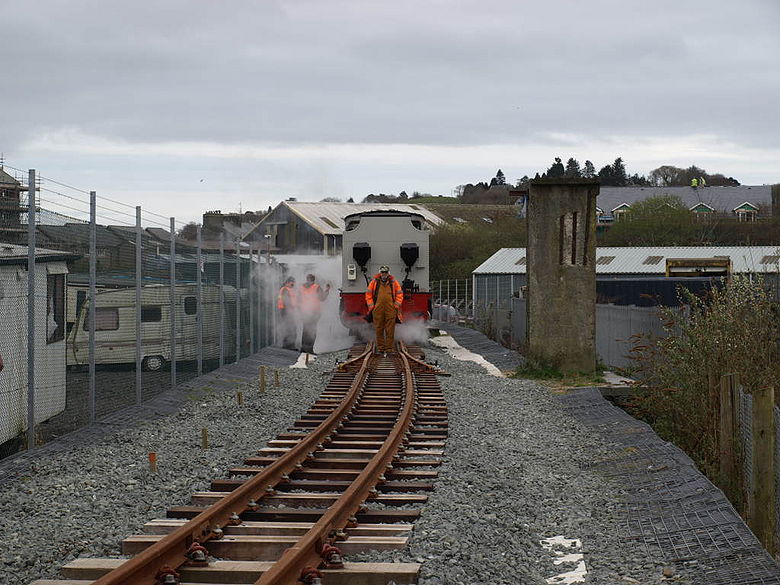 An early movement prior to opening was the ecs transfer of Loco 87 and Carriage 2090 to Dinas Junction, also part of a "training exercise". Here, Fred Howes walks past the site of Portmadoc New (1923), the catchpoints for the NR crossing, and the sole remnant of the station, the water tower column

Fred "retired" from the permanent staff in 2009, although he continues to provide support in various ways. In 2010 he was given a Lifetime Achievement Award by the Transport Trust.