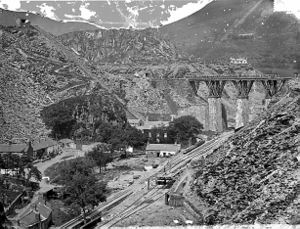 Rhiwbryfdir was the site of a village now mostly obliterated by the quarry tippings, and the original terminating point of the FR in 1836 (at the end of the Dinas Branch). There was never a passenger station of this name (when the passenger service started the area was served by Dinas Station just to the south, until 1870) but there was a smithy and a large stable of horses. The official end of the FR was marked by a stone inscribed with "J.W.G" and "F.R." on either side of a vertical line. J.W.G. refers to John Whitehead Greaves who owned the track onwards from this point to Llechwedd Quarry.

There were also inclines connecting to the Oakeley and Welsh Slate Co Quarries, see Slate and The Festiniog Railway.

Thomas John Spooner, the solicitor and brother of Charles Easton Spooner, presumably also acting for the FR, was written to by the latter regarding Hall & Wakefield, gunpowder manufacturers. They already had magazines at Rhiwbryfdir, but had been asked to move them. A location near the Old Moelwyn Tunnel was under consideration and the second letter included a draft of the lease and the plans.

William Edward Oakeley later undertook the running of Holland and Rhiwbryfdir Quarries, and from 1878 until 1882 was solely responsible for the quarry administration.