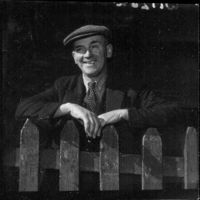 Will was born 23rd February 1903 and came from Waunfawr. It is said he was on the construction gang that built the Welsh Highland Railway

He was later employed by the FR Co. as a porter and was appointed "Porter in Charge" of Tan y Bwlch station in 1924. There he met Bessie; they were married in 1929. Will was engaged for PW work in the winter and this became his main occupation, leaving Bessie in charge of the station.

Will had to leave the FR Co's employ when the railway closed, but in 1955, he was seconded to the Festiniog Railway by his employer, Merioneth County Council, for urgent permanent way work. On his return, Will proved to be an invaluable and ever patient teacher of a succession of volunteer track gangs.